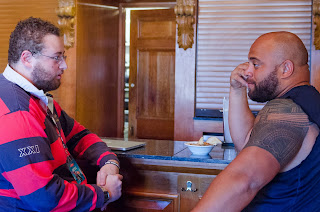 When the Jaguars came over to London last week for their International Series game against the 49ers, the Jags' PR staff granted us some exclusive one-on-one time with defensive tackle Roy Miller, who, along with his team mate Geno Hayes, became the first players in NFL history to play three 'home' games at Wembley
Stadium, having both been members of the Tampa Bay Buccaneers in 2009 and 2011. While we talked about playing in London, the conversation soon shifted to Miller's time with the Bucs - I'm a Bucs fan, what do you expect? - and Roy was very open and forthcoming about his time in Tampa. Among the topics we talked about were Roy's opinion of the NFL's London project and the city itself, being reunited with a former Bucs coach at Jacksonville, Josh Freeman, Greg Schiano and the perceived turbulence at his former team, and even some Xs and Os. Hit the jump for our exclusive interview with Roy Miller.

Photo courtesy of SBMedia. Special thanks to Ryan Robinson and Mike Farnham of the Jaguars' PR department.

Trading Places:- Who Should Move Where

The NFL trade deadline is tomorrow and traditionally very little happens on deadline day due to the difficulties of players picking up a new system mid-season. But if this were a "Madden" league there are more than a few players that would be getting talked about very seriously. So who could, and maybe should, go where?

If you agree, disagree or think we missed out a trade you'd like to see your team make before the deadline tomorrow let us know in the comments below, or hit us up on Twitter or Facebook

Waiting For the Hurricane: the hidden factor in Sunday's International Series game

There are iconic moments in television history, clips that live not only in the collective consciousness of those who watched such moments live, but so too in the minds of subsequent generations, so strongly can they be woven into the cultural fabric of a society. In the minds of the British public, there is arguably no more infamous moment than that broadcast twenty-six years ago, when veteran weather reporter Michael Fish, on national television, laughed off a tip from "a woman that rung the BBC [who] said that she heard there was a hurricane on the way." Fish smiled at the camera and assured the British public that "if you're watching, don't worry - there isn't". A few short hours later, what would retrospectively be called the Great Storm of 1987 hit the shores of Britain, killing 18 and causing over a billion pounds of damage.

For those of you who aren't up to date with current climatological events pertaining to the British Isles: a hurricane that is predicted to be the most severe storm to hit Britain since 1987 is expected to hit the South-East of England this Sunday evening. The Meteorological Office cannot yet be certain when the storm will make landfall, but based on the Met Office's data, the more severe weather should begin to show its face between 7pm and 8pm.

Or, in NFL terms: right around halfway through the third quarter of this Sunday's International Series game at Wembley.

The Sights of the NFL Fan Rally 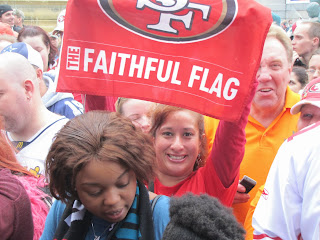 On saturday 26th October the NFL once again took over Trafalgar Square in the heart of London. Thousands of fans turned up for an afternoon of interviews, cheerleaders and drum lines.

The atmosphere was fantastic all day despite the on and off showers and grey skies. Here are some of our photos and videos from the day. Enjoy.

- All photos courtesy of Toby Durant 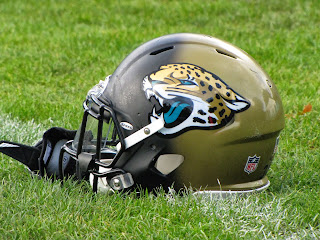 Thursday in Surrey saw the Jaguars players and coaches face the media with one thing on their lips. Finishing off drives and scoring touchdowns.

The Jaguars have scored just 6 offensive touchdowns this year and are the lowest scoring team in the NFL and everyone who follows the NFL is acutely aware of the Jacksonville Jaguars issues scoring points. And this week so are the Jaguars; almost single-mindedly. The message all week, from Brad Meester during Tuesday’s Play60 event to Thursday’s press conference, was about scoring touchdowns, particularly once they get into the red zone.

- All photos courtesy of Tim Wainwright
Read more »
Posted by Writers at 23:46 No comments:

Like Any Other Road Game: Wednesday notes from the Jaguars

For a team that had crossed the Atlantic twenty four hours earlier, getting ready to play a 'home' game on a different continent in front of an audience that will in the main be fans of other NFL teams, and travelling without its head coach, it's perhaps not surprising that a key theme among many of the Jaguars players who
spoke to the media yesterday was attempting to establish normalcy.

All photos courtesy of SBMedia 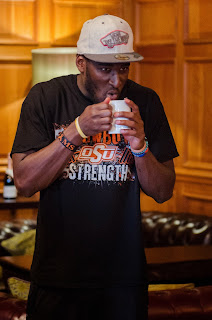 "We always set our clock for that time to try to get ourselves on that week’s schedule by the time we make it into [a] city and the same thing happened for this trip," defensive tackle Sen'Derrick Marks explained about the team's usual preparation for away games in other time zones, "I think we’ll be pretty good and we’ll flow right into it. I don’t think it should be that big of a difference." Chad Henne, who Gus Bradley announced later in the day would be the starting quarterback for Sunday's game despite Blaine Gabbert being fully cleared for practice, also tried to sell the 'business as usual' message, stating "it's just football really. Once we get out on the playing field, it's still the same field out there that we've been playing on, just go do our jobs", though he admitted "I don't know if everybody is accustomed to the time change yet".
Read more »
Posted by Writers at 10:35 No comments:

Jags Bring the Meow, Not the Roar: Notes from the Jaguars' Play60 Event

Tuesday represented the first real opportunity for the Jacksonville Jaguars to embrace the city that they'll be calling home for at least one week of the next four NFL seasons - a chance to establish the tone of the relationship the team wants to have with the London community for the coming years. 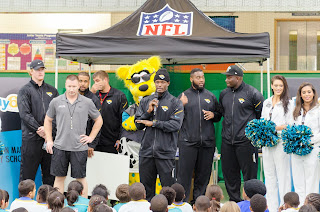 The Jaguars' involvement in their Play60 event consisted of their mascot, a handful of cheerleaders, and all of six players.

All photos courtesy of SBMedia

Golden Goals: not your usual Play60

The NFL's Play60 initiative has been a part of the International Series for several years now, ostensibly helping the league to push its promotion of an active lifestyle to curb obesity to international borders while introducing British schoolchildren to American football - and providing ample photo ops in the process, of

course. All Play60 events, however, are not created equal; for years, there were only a small contingent of NFL players at each event, more often than relegated to having the presence of a handful of rookies and backups guiding the children of London over step-over bags and through tackle dummies - until last year.

All photographs courtesy of SBMedia

A Bad Day For Quarterbacks 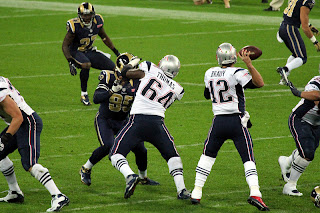 The modern NFL is an extremely quarterback friendly environment. Defenders can't hit you below the knee in the pocket. A slight graze of your helmet is a 15 yard penalty and safeties can no longer blast receivers over the middle. But sunday 20th October was dark day for signal callers around the league.

Two serious injuries have teams reeling while other minor ones have created openings for backups to stake their claim to starting jobs.

We got to see two rookies take to the field this week thanks to injuries and have varying levels of success while two wildly successful veterans had very disappointing days. But let's begin with the clearest of all these murky QB situations.

A big 13-win week from Phil saw him roar back into contention while Gur's 11-wins pulled him level with Toby.

This week sees the Saints and Raiders take their byes, Peyton's return to Denver and a start for home town hero Case Keenum, the NCAA's record holder for most passing yards and passing TD's, in Houston.

There's also the exciting prospect of seeing the two teams that will be coming over to London next week as Jacksonville host San Diego and the 49ers travel to Tennessee. We will once again be at all the build-up events next week so keep a keen eye out for news, stories and transcripts from both teams practices and press conferences.

And then there were 3. Last week both Seattle and New England were handed their first loss of the season, leaving New Orleans, Denver and Kansas City as our last remaining unbeaten teams. In 2009 the Saints started the season with 13 straight wins on their way to a Super Bowl triumph over Peyton Manning's Colts who had won their first 14 games. Are we going to see another such show down between Manning and Brees? Both are leading seemingly unstoppable offenses and have defenses that are more than capable. There's a long way to go, but it's looking good for Manning-Brees II.

Past the jump you can find our Week 6 winners, Toby's weekly 1-out-of-3 spread picks and our game of the week. Enjoy!

Week 5 sees a bevy of good match-ups. Russell Wilson and Andrew Luck square off in Indy which will give us a good idea of how good the 3-1 Colts really are. Drew Brees takes his resurgent Saints to Soldier Field and Matthew Stafford heads to Lambeau to take on a Green Bay team that he has never beaten.

After the jump you can see our picks, Toby's 3 weekly spread picks and our game of the week. Enjoy.

4 weeks into the season and the start of another month can only mean one thing: POWER RANKINGS! This is our first set of power rankings for the year, and as every they're an average taken from each of our own set of rankings.

So sit back and enjoy them, and as ever if you disagree or would like to argue that your team should be higher or lower then you can leave a comment or get in touch with us via Twitter and Facebook.