Week 3 had a fair dose of craziness scattered through it. Cleveland flipped Trent Richardson to Indy, benched Brandon Weeden and then went out and won a thriller in Minnesota just when everyone thought they were running up the white flag at the Factory of Sadness. Then there was the 7-sack beat down the Carolina Panthers put on the Giants.

So what do we get this week? Well if you haven't been paying attention, the Vikings and Steelers have made their way across the pond for the first of two "International Series" games this week, as the NFL continue to dip their toes deeper into the UK sports market. Is it a precursor to a permanent franchise being based here? Maybe. After all they are upping the schedule again to 3 games next year, but we'll have to wait and see how that next litmus test goes.

For our picks, Toby's increasingly dodgy spread picks and our game of the week, you'll have to go to the other side of the jump! 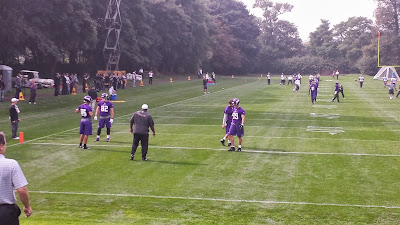 Coming off an early-morning walk through with the team, Coach Frazier opened his Thursday press conference with a short statement declaring it to be a "very important day for our team", a day which the Vikings would use to focus on the fundamentals of the game, and to practice some of the situational football that has let them down over the first three weeks of the season - and, of course, to see if QB Christian Ponder's rib injury would prevent him from starting on Sunday.
Read more »
Posted by Writers at 08:28 No comments:

Week 3 in the NFL saw a number of outstanding games, some shocking results, and a few teams started to show their true colours. Amongst the headline makers, we've again picked out the best and worst performances from the week's action, as well as hailing an unsung OL hero. Our week 3 MVP, LVP and O-lineman of the Week are after the jump.

The Minnesota Vikings versus Big Ben 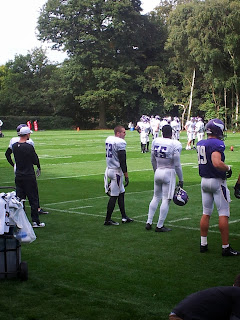 Ask your average British person to describe "Big Ben" and the picture they'll paint you is one of a large clock tower on the bank of the river Thames. Well this weekend the British public will be exposed to a completely different Big Ben. A 6 foot 5, 240lb quarterback who had cornered the market on frustrating pass rushers long before Cam Newton, Colin Kaepernick and the Class of 2012 joined the NFL.

We've all seen the plays that have been common place since Ben Roethlisberger came to Pittsburgh in 2004, the big #7 moving around the pocket, staying up despite taking hit after hit and then some how getting the ball down field to his receivers when he's got pass rushers hanging off him.

Sure, Ben's style of play has lead to him taking some unnecessary hits which have resulted in missing games through injury, but he's also lead the Steelers to 3 Super Bowls since 2004, a feat matched only by Tom Brady.

So how do the Vikings feel about facing off against this Big Ben? Well we found out today....

After their photo and publicity op with London schoolchildren on Tuesday, Wednesday was business as usual for the Vikings at their adopted home for the week, The Grove Hotel in Watford. 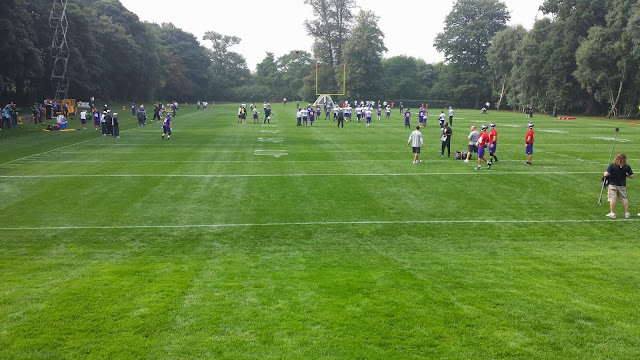 A full sized grass football field (complete with Y-shaped goal posts), a Portakabin-style mobile fully-equipped weight room, cold tubs, video platforms atop cranes - if it weren't for meticulous green lawns that surrounded the area, you could be forgiven for thinking you were at an NFL training facility, rather than one of the most exclusive luxury hotels in the vicinity of London. Various people at the Vikings organisation, for the ownership down to the players, have stressed that the team have tried to make this as normal a week as possible, and from the facilities we were shown at the Grove, it's an aim the Vikes have pulled out all the stops to try and achieve.

Running Back Into Contention?

3 games into the season and a return to the playoffs looks like a long shot for the Minnesota Vikings. They've already lost to 2 divisional rivals, first on the road in Detroit and then in a heart-breaker at Soldier Field to the undefeated Chicago Bears. Then there's the 1-2 Green Bay Packers who already have two of their tougher out of division games behind them. So how does a 0-3 team make it to January football?

Sights and Sounds of the Vikings at the London Play 60

A collection of photos from today's Play 60 event 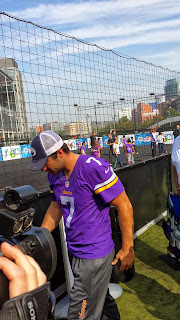 Viking Invasion: Minnesota kicks off Game 7 of the International Series at today's Play 60 in London.

The seventh International Series game may take place this Sunday, but the events surrounding the match began today, with the Minnesota Vikings holding a Play 60 event in the shadow of Wembley Stadium for children from some local schools. The Pulling Linemen spoke with some of the Vikings players to find out their thoughts on the International Series, the state of their season so far, and the importance of their game against the Steelers under the Wembley Arch.

After two weeks the pressure is already on for the 8 0-2 teams, two of whom made the playoffs last season. Some may feel that a tough opening schedule is the reason (Minnsota), or that bad luck has played its part (Tampa Bay). Others, like the Jaguars, are right where we expected them to be.

Meanwhile our 2-0 teams (including the now 3-0 Chiefs) are hardly all happy with themselves. New England have scratched out a pair of divisional wins and will need a greatly improved offensive performance against Revis and his new team this week, while Houston have had to fight tooth and nail for their wins and over-come a very iffy start to the season from Arian Foster.

So who are we picking for some crucial week 3 match-ups? Find out after the jump!

What We've Learned So Far

2 games into the 2013 season and some teams are looking like a shoe-in for Super Bowl XLVIII, while others should already be planning for the draft in April. Some perennial contenders look to be falling back but others have come out of re-building phases looking strong.

So, what conclusions are we making after 2 games? Find out after the jump!

Week 2!! Football is firmly back, we saw surprises, both good and bad, unbelievable performances and heartbreaking losses in week 1. This week we've already had possibly the worst game of the year on thursday in Foxboro which saw the Patriots very nearly drop what should have been an easy win.

After last week's straight win picks, this week we're hitting you with a couple of spread picks courtesy of Toby and his "expertise" as well as a break down of our Game of the Week. Check them all out after the jump, and as ever if you disagree feel free to let us know!

That warm, fuzzy feeling inside is thanks to the NFL being back. Setting your fantasy lineups, making your eliminator picks, then settling down to a Sunday of action - it doesn't get much better than that. And with the start of the new season, here at TPL towers we've decided to launch some weekly awards, for the MVP, LVP (yeah, least valuable), and Offensive Lineman of the Week!

There were some great candidates for each award in Week 1, so take a look after the jump at the nominees and winners!

At last week one is here! It's been a long summer and a teasing pre-season, but finally it's time to get to serious football and put our money where our mouth is when it comes to picking winners. The great thing about week one is that everyone thinks their opinions are right. You can spin pre-season performance any way you want, and start every discussion with "well on paper...". The great thing is that now the debates come off the paper and onto the grass (or field turf) and get decided in the best way possible: 60 minutes of arse-kicking football!

So here are our week one picks, dive right in...

The Best Offensive Lines in Football 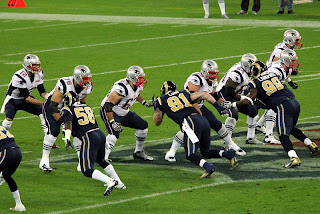 Just what makes a great offensive line? We've all heard about guys like Drew Brees, Peyton Manning and Tom Brady making their offensive lines better simply by making the right decisions and getting the ball out quickly. We know that
players like Adrian Peterson and LeSean McCoy can get yards by themselves if need be, but which unit stands out as the very best in football? And which others will give them a run for their money?

If you've not guessed already, we here at The Pulling Linemen love linemen. We're perfectly happy to sit down on a sunday night and ignore the "skill" guys in favour of a good battle in the trenches. So just who do we rank as the top offensive line in football? And who are their biggest challengers in 2013? Find out after the jump

So here we are, September is upon us and so too at long, long last is the NFL season. Which means, we need to pick some winners!!

Our picks can be found after the jump, everything from division winners to the Super Bowl and player awards is covered, as well as our pick in the Battle for Bridgewater. We've each taken a moment to explain some of the riskier and more controversial picks. If you agree with us or fancy debating your side you can leave a comment or get hold of us on Twitter or join our Facebook group.

So, after weeks of counting down our list of the one hundred best players in the NFL for the 2013 season, we come to the final leg: the top ten. As always, let us know what you think not just of these ten names, but the whole list, on Twitter, Facebook or e-mail.

The best ten players in the NFL are revealed after the jump...