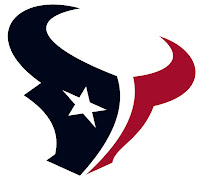 Now we've hit the post-season, it doesn't mean we're going to start giving Offensive Lines around the NFL an easy ride. Nor are we going to stop crowning our OLs of the week. From the Wild Card round of the playoffs there was one clear winner, the team that finished 12th overall in the NFL in our OLR season wrap up last week, a team that has a trip to New England this week for its troubles.

The winners on Wild Card Weekend are the Houston Texans.

And they did it in the closest matchup of the weekend. In reality, the Texans were the only likely winners against the Bengals on Saturday, the Texans offense was just better, as was their offensive line. They ground out 158 rushing yards on 39 carries, giving them a YPC of 4.1 - nothing to write home about. But they also recorded 8 rushing first downs in the game, and important didn't allow a single sack of Matt Schaub. In fact, Schaub was taken to ground only twice in the game, and even on his truly awful pass towards FB James Casey that was intercepted and returned for 6 by Benagals CB Leon Hall he didn't have an ounce of pressure on him from anywhere. 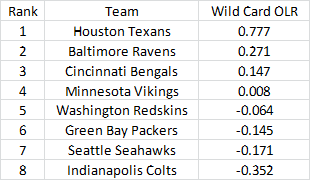 In that game the Bengals weren't actually far behind the Texans in terms of OLR score, but the fact that they didn't score an offensive TD all day and they allowed 2 sacks of Andy Dalton didn't do them (or their team) any favours. In fact, the only really reason their OLR score was decent was their YPC of 5.0, and seeing as they carried the ball just 16 times in the game (fewest of any teams this weekend), even this didn't do them much good.

As for the worst OL from the weekend, well it was always likely to be the Indianapolis Colts. Our 28th ranked OL from the regular season has been poor since their shocking week 6 performance against the New York Jets, and they continued their devastating form this weekend, allowing 3 sacks and a weekend-high 10 total knockdowns of QB Andrew Luck. The difference maker in this game was Paul Kruger. The Ravens linebacker was in career form, recording 2.5 sacks and numerous other pressures, and the Colts OL just didn't have an answer for him, not affording Luck the time in the pocket he needed to give the team a fighting chance of winning this game. Come next year, the Colts will still be a decent team, but if they have any aspirations of post-season success for the next 10 years they need to seriously address their OL in the off-season, or they're just one big sack away from losing their saviour.

Of course, as we enter the "off-season" (as if one really exists in the NFL anymore) we'll be looking at the OL prospects who are likely to hear their names called at Radio City in April, but just as a sneak peak, there are 2 interior linemen with National Championships in their pocket after last nights result that the Colts will certainly be doing A LOT of homework on: Chance Warmack and Barrett Jones.

- Phil Gaskin (@sosayitisaid)
- The Pulling Linemen
Posted by Writers at 19:41