The Divisional Round of the playoffs was record breaking in so many ways. There were 44 more points scored in these 4 games than the previous Divisional Round record, Colin Kaepernick broke the single-game rushing record for yards by a QB, and the matchup at Mile High was both the coldest Broncos playoff game in history at -2 Fahrenheit, and also the 4th longest NFL game in history at over 76 minutes of game clock. We very nearly also had a historic OLR day, as with the weekend very much offense focused, nearly every single team in action recorded a positive score in our exclusive Offensive Line Rating system. Almost. Thanks Broncos... 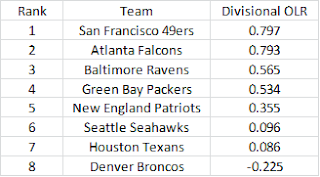 The top two teams in OLR this week are almost inseparable by score, just 0.004 between the 49ers and Falcons for the number one spot, but it is for different reasons the two scored so highly.

The #1 spot marginally went to the 49ers, due to their ridiculous day on the ground. Not only did Kaepernick set a record breaking 181 yards on 16 carries, but his running backs did a fine job too, Frank Gore contributing 119 yards on 23 carries, and Anthony Dixon scoring a TD from 2 yards out on his only carry of the day. In all, the 9ers recorded 4 scores on the ground,  a total of 323 rushing yards for a YPC of 7.5, and 15 rushing first downs. Staggering numbers. The only let down for their OL was allowing pressure on their QB. Kaepernick only ended the game being sacked once, and knocked down in the backfield once more, but there were numerous snaps where it was due to Kaepernick's elusiveness that he was able to get away and scramble for positive yards or get a pass off, rather than taking a sack.

The Falcons on the other hand, they kept Matt Ryan almost untouched. Our number 2 OL from the divisional round has been much maligned this season, and finished 2012 as the 25th ranked unit in the NFL, but this week they were in fine form. Powering Jacquizz Rodgers and Michael Turner to a combined 162 rushing yards, and a team YPC of 6.4 was a huge improvement on their regular season performances, and perhaps this has as much to do with the Seahawks' shocking 1st half tackling as it does with the Falcons OL, but they allowed no penetration all game, either in the run or pass, and ended with just 1 negative rush compared to 6 rushing first downs. Their real OLR value though was definitely pass pro. Matt Ryan wasn't sacked once by the Seahawks, and nor was he even really pressured, given aeons in the pocket to consistently hit Roddy White and Julio Jones downfield. It made the job impossible for the Seattle DBs, no matter how good they are - you can't cover athletes like the White, Jones and Gonzalez indefinitely, some time Ryan is going to find one of them. And he did.

At the other end of the table there was just one negative OL performance all weekend, from the Denver Broncos. Their run game was anemic with 125 yards on 41 carries  (a YPC of 3.0), and even with Ray Lewis taking himself and Terrell Suggs out of a play by falling over his own legs, the Ravens managed to get enough pressure on Peyton Manning that the man who has looked like an MVP all year fell into post-season Peyton mode and threw 2 key picks - one with his second attempt of the day, the second with his last of the season. He also gave up a fumble on a sack from Pernell McPhee, which would've been two fumbles on two sacks had an earlier strip-sack from Suggs and Paul Kruger not been negated by 2 defensive penalties. The truth is, the Denver OL didn't have an answer for the Ravens front 7, and even though they stuck with an unproductive running attack all game, it was always left to Manning to try and win them it, which in the end he couldn't.

- Phil Gaskin (@sosayitisaid)
- The Pulling Linemen
Posted by Writers at 16:55