Now that Christmas is over, it's time to get back to more important things. Like football. Now we've reached crunchtime in the 2012 season, and with one week to go it's time for the real contenders to step up. Enter the Seattle Seahawks. Whilst their offense has been exploding in recent weeks with scores of 58, 50, and now 42, it's no secret that they've been rolling, but big totals against Arizona and Buffalo aren't always something to write home about. When you put up 42 on one of the best defenses in the NFL, and a real Superbowl contender, then people really start to take notice. It's this big scoring win over the 49ers on Sunday Night Football that was won the Seahawks Week 16's OLR #1 spot, and as other top OLs falter around them, a shot at the 2012 OLR title.

A few weeks ago it was inconceivable that anyone could catch the New York Giants for the #1 overall spot in our exclusive OLR statistic, grading offensive line units around the NFL. Since midseason they have been comfortable leaders, but the past few weeks have seen them crash back down to earth, and new contenders rise to the top.

The Seahawks are now their closest challengers, after putting up a huge 0.902 score in week 16, earning this weeks top spot. Since their bye week, they've put up consistently high scores week in and week out, but have never quite fought their way to the weekly top spot until now. It took facing a top defense to push them over the edge, even though their stats in week 14 and 15 were better when you look at the raw numbers:

These days, it's no real feat to score big on Arizona or Buffalo, those two defenses are languishing in the bottom half of the NFL in the second half of the season, not really able to defend the run or the pass. The 49ers on the other hand are a top 5 defense, and putting up 4.51 YPC and allowing only 1 sack against them is a very strong performance, as is Marshawn Lynch's 111 yards on 26 carries. They were also able to keep the league's sack leader off their QB, Aldon Smith unable to record a sack for the second week in a row. This is a familiar point in our OLR piece, as we mentioned last week how the Patriots OL didn't let Smith sack Brady in week 15, helping them to the top of the OLR table. Of course, Brady's quick release was as much to thank for that stat, as Smith did get significant pressure on the QB on a number of occasions, repeatedly beating Nate Solder at the line. This week, Smith again got pressure in the backfield, but it was Russell Wilson's elusiveness and quick feet that kept him clean, as he was able to outmaneuver Smith, most notably on a 1st down in the second quarter. Smith was able to read and react to a fake stretch right play, and meet Wilson 10 yards deep in the backfield, but despite his determination to reach the NFL sack record, just 3.5 sacks away, Wilson stepped him, and was able to make 9 yards on the ground, before finally being bought down for a 1 yard loss by Isaac Sopoaga, the only sack allowed by the 'Hawks the entire game. The real key to Aldon Smith's lack of potency this week, however, was the fact that his partner in crime Justin Smith was absent through injury. From the 3-4 DE position, J Smith is a phenom, often eating up two blocks and using his hands in a way that leaves Aldon untouched on his route to the QB. Through their stunts and loops, they can neutralize even the best LTs in the game. With Ricky Jean-Francois in J Smith's place, there just wasn't the same kind of threat off the edge, and LT Russell Okung and LG Paul McQuistan were able to keep Wilson clean and Lynch rolling.

Just as the Seahawks have been climbing in recent weeks, the Giants have been tumbling. This week saw another poor performance from the G-Men, able to run for only 67 yards on the Baltimore Ravens, and allowing a total of 9 QB knockdowns on Eli, including 3 sacks. They might have had more success running the ball, and seen more success like David Wilson's first quarter TD scamper, if they hadn't fallen behind so early, going into half time 24-7 down. Their poor offensive performance meant they only had 14 rushing attempts and 28 pass attempts all game, not the recipe for success, and sacks from Haloti Ngata, Brendon Ayanbadejo and Omar Brown plus constant pressure on Eli really show how poor the protection was. Their OLR score of -0.321 has dragged them right back into the fight for OLR top spot on the season, and with the Seahawks really on a roll, they might go into week 17 as favourites to grab that #1 spot as they face the St Louis Rams in Seattle, whilst NYG welcome Philly. 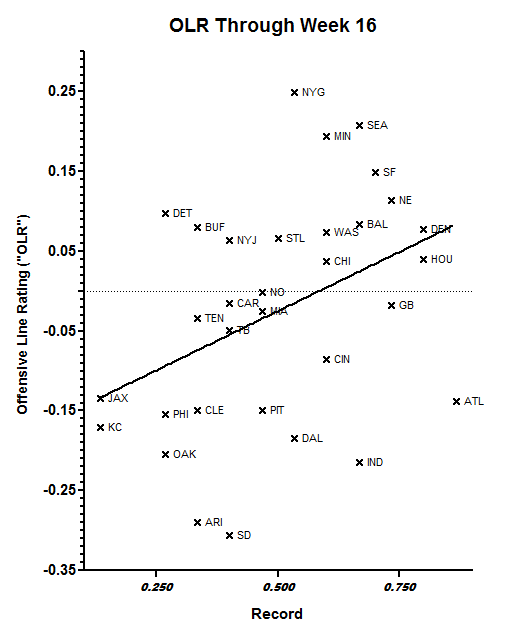 In fact, week 16 was a time when Christmas was not kind to the three OL kings, of NYG, NE and HOU. The Giants might have slumped to 21st this week, but the Patriots, OLR winners in week 14 and 15, were even worse down in 31st, and the unit that boasts possibly the best LT in the league in Duane Brown, the Houston Texans, fell to 26th.

New England scraped a win over the Jaguars. That sentence pretty much tells you all you need to know. The Jags are not a good team, at all, so for the perennial Superbowl contenders to have struggled, you know the offense and the OL in particular must have struggled. The Jags are still bottom of the NFL in sacks recorded, but this week they racked up 3 sacks of Brady, and a further 6 knockdowns, but it was really the pressure they got on Brady in the first half that made this a much closer game than it should have been. Brady's two interceptions in the first half came courtesy of bobbles and pressure, firstly Stevan Ridley choosing to bat a ball straight up to Chris Prosinski, and secondly Terrance Knighton's persistence, as well as Dan Connelly just deciding to block someone else, leading to pressure on Tom and his pass being picked off by Derek Cox. Even on Brady's completions, like the one to Michael Hoomanawanui in the first quarter, he was hit hard, with Jason Babin looking like more of a threat in North Florida than he was in his last days in Philly. They might have made it out of Jacksonville with a win, but a YPC of 3.8 and 3 sacks allowed against the NFL's worst front 7 really is worthy of 31st this week, and a drop from 2nd overall to 5th in the OLR season so far.

The Texans weren't lucky enough to escape with a win in week 16, nor were they even close. For a team with a huge rushing attack, they managed just 33 yards on 16 attempts, a YPC of 2.06, and got just 1 rushing first down (compared to 5 runs for negative yards). 4 sacks and 6 further QB knockdowns in the passing game and you can really see why they didn't manage to put up a TD at all against the Vikings this week, slumping to a 23-6 loss. Their -0.531 OLR score means they've crashed out of the top 5 in OLR for the season, and short of a week 17 explosion, won't even make the top 10 when the final scores roll in. Their opponents this week, the Vikes, have gone in the opposite direction in recent weeks, earning the #2 spot for week 16, and currently sitting #3 overall. Whilst the Texans struggled, the Vikings stacked up 174 rushing yards and a Toby Gerhart TD, with Adrian Peterson knocking on the door, but still just short, of the 2000 yard mark for the season. They also kept Christian Ponder clean(ish), JJ Watt recording the only sack of the Vikings QB all game (making him the new NFL sack leader, ahead of Aldon Smith), and stripping the ball at the same time. The Texans did get plenty of pressure on Ponder, and took him to ground a number of times, but even this wasn't enough to get them the win they needed to lock up a first round bye in the playoffs, and instead has pushed Minnesota to within touching distance of a Wild Card spot.

With just one week to go, almost all the playoff spots are locked up, only 2 still remaining in the NFC, but the OLR race is still wide open. Thanks to recent weeks the top contenders are NYG, SEA and MIN. With their current form, smart money is on the Seahawks, but it really is the Giants to lose. If they carry on playing how they have the past 2 weeks, they'll probably manage to do that too...

- Phil Gaskin (@sosayitisaid)
- The Pulling Linemen
Posted by Writers at 11:16