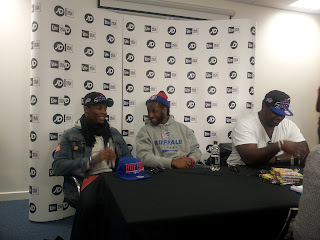 As by now you surely know by now, especially if you're following us on Twitter as we live tweet Rams practices, press conferences and media events (HINT HINT), TPL are all over the various bits and bobs the NFL are running around London in the build up to this weeks' International Series clash. You'd be mistaken if you thought that all the events are being organised just by the NFL or NFL UK - and you'd be equally mistaken if you assumed that the events would only feature teams involved with the International Series (which I'll generously extend to include Fred Taylor, with the Jaguars starting their four-year residency next season). While I've been dutifully reporting on every single thing the Rams have done over the two days since they landed (well, not quite) in north-west London, as Ram-o-phile Phil was coming down from Nottingham to cover his beloved St Louis team in the flesh (which you'll know if you follow us on Twitter HINT HINT HINT), I instead today found myself on the absolute other side of the Capital this afternoon, in the newly-built Westfield Stratford City shopping centre (the one they built because of that little 'Olympics' thing that went on a few months ago which no-one really paid attention to).

"But Gur (and/or Fred, if you're that-way inclined)", I hear you ask (yes, I bugged your laptop), "why on Earth would you do such a thing?" Well, hypothetical reader, it was because those wonderful guys and gals at New Era decided that there was no better time than the present to piggy-back on the pre-Wembley hype and cash in on London's football fever by teaming up with JD Sports to bring over three members of the Buffalo Bills to talk with the media and have a good ol' fashion sign-and-greet with the fans.

However, as the hour delegated for media access was scheduled at the same time that, 36 miles away on the other side of London (that's road distance, not as-the-crow-flies), there was the media access to the Rams players and coaches in a top-class training facility with fully-equipped media room, it was perhaps less than surprising that most of the sports media chose to attend the Rams' session London Colney. However, there was still plenty of reporters in line ahead of me waiting to interview the Bills' triumvirate of Stevie Johnson, Kelvin Sheppard and Marcell Dareus. Almost every single one of them, however, this being a New Era event, was from a fashion website or 'lifestyle magazine'. I must admit, I grew concerned that we would be told the media access portion of the day would be over before I had time to ask my questions, and was almost indignant that I, a widely respected* NFL analyst**, may not have access to these three players, while the Bills themselves looked utterly bored as they answered generic questions that could be applied to any sport ("when did you first know you wanted to play in the NFL?"), or, worse still, suggested that the interviewer didn't even know who they were speaking to, or why they were famous ("so... what is your favourite range of New Era caps, the fitted or the snapbacks?"). With the exception of two interviewers who (shock!) knew the game of football and (double shock!) actually knew who they were interviewing, I don't think the Buffalo players were posed an actual question about football. At last, though, my time had come. I marched purposefully up to the table, laid down my trusty dictaphone before them (which, by the way, can be seen in this NFLUK video, pointed at the mouths of Chris Long and Cortland Finnegan - that's right, my equipment has more celebrity than I do), and fired away with my first question...

The Pulling Linemen: Stevie, when you came into the league, it was as a seventh-round pick. Do you hold any grudges as a result, or want to prove people wrong and should have gone higher?
Stevie Johnson: I don't hold any grudges. Everything happens for a reason, I'm a big believer in that. I can only take it as motivation, I'm not negative about it at all. I carry it on my sleeve, I'm proud to have come into this league as a seventh-rounder and get to where I am. It just shows the work that was put in and just believing in [my]self so I like the fact that I came in as a seventh-round pick.

TPL: In your second year, you played alongside Terrell Owens. What was that like? What did he teach you?

SJ: It wasn't so much about football, I didn't ask him any questions, I just watched him practise, which was great because he works very hard. For the most part, [he taught me] about life outside of football, the ups and downs, and trying to stay even no matter what happens. He was one that I could listen to and be like, “OK, I know he's been through this” instead of in one ear, out the other. Just life lessons, things that might happen and how to get through it.

SJ: He's one of the greatest defensive players in the league right now. I give him all credit and all props but that's where I've got to leave it. He is what he is and I think that in the future, once he gets back, we'll have great battles to come.

TPL: Would you say he's the best DB you've lined up across from?

TPL: Who is?
SJ: I can't say any of them are the best because they're all pretty good in their own respect.

TPL: OK, put it this way, which one gave you the most trouble?

SJ: My teammates give me the most trouble! Practice is harder, I truly believe that. I think the guys on my team are very rare in their coverage [ability]. The other guys on the those teams are great, we all know [that], but I have a hard time at practice.

TPL: Kelvin, Marcell, even though it's your second year in the league, it's only your first with having a full offseason. How do you compare this season, with that amount of preparation, to last season, coming off the lockout?

Kelvin Sheppard: I know that for me, being a middle linebacker, making the calls, making the checks and things like that, it helps out with me having the OTAs and having those practice sessions with my team mates. It's not the same, being away from each other. You can say it is, but it's just not. Being there together, making the calls, doing the whole-field adjustments together, that extra month you get, I think helps going into training camp.

Marcell Dareus: He wrapped it up pretty good!

TPL: Kelvin, you went to LSU.

TPL: And Marcell, you went to Alabama... [Dareus and Sheppard both start laughing – they know where I'm heading with this question] Did you two have a wager on the BCS Championship game last year?

KS: We were actually there, sitting beside each other... we'll leave it at that!

TPL: Marcell, your defensive line is considered to have as high potential as any line in the league, but this year has been a slow start playing together. What do you think that you, as a unit, need to do to reach the next stage?

MD: We need to continue to gel together. It's hard to just put together this unit and expect it just to stick. We've got to find the right combination just to get it there. I think the more and more we can play more games, we can get a chance to turn it on together. We can't go forward in practice going against hurt O-linemen. It's things like that. So we get to do it in the game and the more and more we do it, the better and better I believe we will become.

TPL: You two have faced Tom Brady and the Patriots' offense three times so far in your careers. What advice would you give to Rams' defensive players going into this Sunday's games?
MD: Get in his face. He knows that's my goal every time we play against him. He knows I'm going to be in his face all game. Any time he tries to throw, I'll be right there. He don't hear me coming, he don't see me coming. He's so patient and so controlled, you've just got to do everything to get in his face. That's the only thing I can tell you.

TPL: This question's for all of you – aside from the look of it, what differences have you noticed in the new Nike jerseys, compared to the old Nike ones?
SJ: It seems like it's a more sleek look. I think the designs are pretty cool, they pop out on the television. It's more of a 'fresh' type of look.

TPL: Does it feel any different when you're on the field or is it pretty much the same?

MD: I'll speak on that - these little guys don't have comfort issues! I really think these uniforms fit better. They put certain cuts in it so that it kinda stays dry and keeps air coming in to you which keeps you hydrated I guess?

TPL: Last question. Next year, in your fantasy drafts, who are you going to take first – Fred Jackson or CJ Spiller?
KS: Oooooh....

[They all laugh – I'm guessing Marcell isn't much of a fantasy player from that response!]

KS: For the fantasy draft? Yeah, that's why I stay out of it, for reasons like this, you've got to pick your teammates!