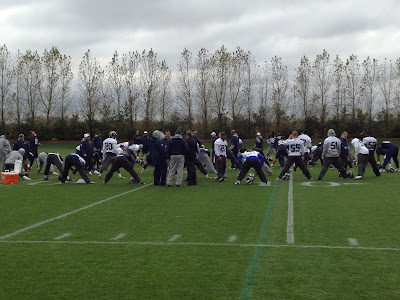 Finally, I got my chance at Rams practice this week. Gur's been having all the fun, but whilst he was off interviewing Marcell Dareus, Stevie Johnson and Kelvin Sheppard of the Buffalo Bills, I took my turn at the Arsenal FC Training facility for a cold and wet St Louis Rams Thursday practice.

Of note from the 20 minute of open practice the press were allowed to see:
Truth be told, the starters took themselves off to a separate field pretty much immediately after warmups, and the majority of the open period was repetition of the punt formation. With that, we were asked to leave the field.

When we were allowed back out, about 75 minutes later, the players were clearly not in much of a mood to talk. Those that weren't immediately collared by the 25-or-so media types on hand headed straight for the buses and disappeared, but we managed to get a few choice words from some of the guys, as well as another bit of musical genius from Cortland Finnegan.

On the number of young guys on the OL

Barry Richardson: I think they came in and they just filled their role. You know when you come in as a backup, any second you can be a starter. It's just one of those things you look forward to, you prepare for, and if it happens it happens.

Harvey Dahl: I concur! It's a good opportunity for those guys, you know?

On how to beat Patriots rookie pass-rusher Chandler Jones

BR: Keep your technique right. He usually takes advantage of your poor set, poor technique, and he'll come after you.

On preparing to play Vince Wilfork

HD: You just have to take into account that he's the best in the league, the strongest... Especially for what he does, you know, he fits their defense, and I would say he's definitely an elite D-tackle.

On beards, and how to maximise their power

BR: Comb it once a day. Make sure you wash it, cause it's just like your hair on top of your head. You don't want split ends of anything. And keep it edged, maybe, once a month or something.

DA: The more you can do, the more skill sets you have, you know, to help your teammates out and you do whatever you can to be better. That's what everyone's looking for.

DA: Well I don't know if I'm gonna be playing, so if I'm not playing I'll be a bad spectator because I love playing and it's hard to sit on the sideline and watch my boys play.

QM: He's a very good receiver, I think he's one of the most underrated receivers out there in terms of route running and going and getting the ball - he's tremendous, so [the Patriots] have got some weapons, and we as safeties have gotta make sure our corners are ready to play and we gotta have their back, be on top, and be where we gotta be.

On the lack of Rams turnovers in recent weeks

QM: They do come in bunches, you know, they come in different ways. A lot of times they come off tipped balls, they might come off forced fumbles. It's been a little bit frustrating these past couple of weeks not getting those extra possessions, but we just gotta keep practicing for them. It's something we strive to do all week and all the time, it's something we're practicing right now and hopefully this'll be the week where we get some.

On exploiting any weaknesses in the Patriots TEs

QM: I dunno man, those guys are good. You got Gronk who's huge and can run, you got Hernandez who's really a big guy but he's a very good receiver, fast guy, runs great routes, break tackles, so we just gotta have good eyes, hopefully cover well enough on Sunday to minimize them.

On the young DBs on the roster

QM: We've talked, we have conversations, try to give them little tips, "Ah, hey, listen rook... Watch this, watch that, be ready for this..." And hey, they thing is [Janoris Jenkins] is a good player, he's a smart guy, picked up the defense really well, and at the end of the day he's been out there making plays as we saw early on. You know we've had a little bit of a slump in terms of turnovers lately, and that's really more of a respect kinda thing, cause I think teams are not testing certain guys as much as they were before. But they'll come, we'll get back and [Janoris] has been playing very good, so we'll be fine.

On whether the Patriots passing offense will present turnover chances

QM: Well they do take a lot of opportunities. I mean that no-huddle offense is quick man, they get a lot of plays out and we gotta be ready for that. It's definitely a concern. You've still got Tom Brady back there, so you might not get a whole lot of opportunities, so if you do you better take advantage. The guy's good... It's something you try to practice, but you can't ever mimic that. You can see it on film, it's tremendous how fast they get back up and it's definitely an issue that we have to be ready for.

Cortland promised Gur that he'd have a rap ready for me today. He didn't disappoint.

CF: I'm Wheezy F baby,
I do it big, weigh me.
These crazy, freaky girls,
Try to cirque du soleil me!

That's all I got man!

On the Patriots defense

SJ: They have a very impressive front seven, led by Vince Wilfork of course. I think they're very stout, they do a good job of two-gapping, it makes it really hard on running backs to get a clean read on what they wanna do. The linebackers do a very good job of disengaging blockers once they make contact with a FB or an offensive lineman, so the thing is for me to trust my eyes and just be really aggressive... They're very stout, very athletic, and pretty sound in what they do. Coach Belichick does a great job of game planning, so I'm pretty sure they'll have something in particular they want to take away from us and try to handicap us and force us to do something but we gotta make sure we exexcute and do the things that we know we can do.

SJ: We're gonna have a very tough challenge on Sunday, we gotta make sure that we help our defense out. Once we get into the Red Zone we gotta put up touchdowns, we gotta take advantage and churn off the clock as well cause their offense can put up points at any given time. Particularly on offense we gotta make sure that we carry our weight... We've made some progress, but you know we gotta continue to score, continue to convert of 3rd downs, and to do that we gotta be very productive on 1st and 2nd.

On Joe Barksdale and Shelley Smith fitting in on the OL

SJ: I believe both guys have done very good jobs, it's only been one week but to come in and learn the offense relatively fast, they've done a great job. Both guys are very athletic, pretty sound in what they do with their feet and their hands, and they have another tough challenge against this New England defense.

On an interesting side note, Steven's old HS team in Las Vegas (El Dorado Sun Devils) has named their field after him

SJ: It's pretty overwhelming. After this bye week coming up I'm gonna go and visit the field, I mean that's kinda where it all started... I kinda teared up last night when I heard they named the field after me. It's amazing, just a testament to how blessed I am.

Following Steven's final words, the team was all but packed up, and the throng of media started to make their way to their transport back into London. One guy, however, hung back. As the stragglers of us that were making our own way home packed up leave, NFL Network's Albert Breer came round the corner. I took the opportunity to pick his brain on the International Series and Sunday's game.

TPL: So Albert, how've you found your time in England so far?

AB: Well this is my third time doing this game, so I guess I've acclimated to this in the past. It's different, I mean, it's definitely not the same atmosphere as you have in the US for games. I know it's an important initiative for the league to go and do this, so I never mind the free trip over here, and it seems like the reception here is positive and it'll be interesting to see where it goes.

TPL: Have you seen it growing over the three years you've been coming?

AB: Yeah, I mean it's hard to tell. It kinda depends on what teams come. I mean the two you have here now, St Louis is gonna have less media than New England. Last year, Tampa was gonna have less media than Chicago, and I mean that stuffs based on the size of the cities. I think what's interesting now is how they take that next step next year, where they're gonna have the Jaguars coming every year,  and having a second game, it really shows you a) how committed the NFL is to it, b) how they really are moving forward with their plans to expand this thing further, and I know that there are some owners and executives that have this project high up on their agenda, and you can certainly see their plans coming to fruition.

TPL: So who's your pick for the game?

AB: I think the Patriots will probably win. But I think the Rams are a good, young team. They have a lot of real good young defensive players, their young quarterback is already a really good one, but they're the youngest team in the NFL, I don't know if they're quite at [the Patriots] level. I think they'll fight with the Patriots, I think they'll be right there into the 4th quarter, but I think New England pulls this one out.


And so ended my day out with the Rams. Check out the rest of TPL for more on our build up to the International Series game, and on Friday hopefully some interviews with the Patriots, who arrive in London early that day.

- Phil Gaskin (@sosayitisaid)
- The Pulling Linemen
Posted by Writers at 01:32