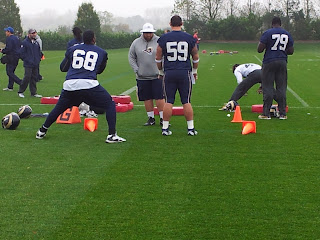 We attended the Rams' practice yesterday, bringing you all the breaking news from the day on our Twitter feed - yes, we reported Amendola's return first (in your face Schefter) - and we're going to be doing the same today, so make sure you're following us! In the mean time, we've got lots of pictures, videos and quotes to share with you from yesterday. So much, in fact, that we didn't have time to put them all up in one go! So we're splitting all the things we recorded from yesterday into two parts - hit the jump for some videos from the day, and quotes from Michael Brockers, Bradley Fletcher, Chris Dahl and Quintin Mikell. Check back later for part two, which will feature a bunch of photos, quotes from Chris Long and Cortland Finnegan, transcripts of Jeff Fisher's and Sam Bradford's press conferences, and a general write up of the day.

Firstly, some Rams come off the team bus. Exciting stuff!

In this vid, in the foreground you have a few of the OL stretching and milling about, while in front of them, a majority of the team are warming up, with the defense and offense facing each other as they go through their drills, mirroring each other.


In the next video, the Rams QBs warm up their arms by throwing to each other and a receiver or two - including Danny Amendola.

The OL practice stepping out of their stances into pass protection.

In case the name of the blog didn't tip you off, we are very lineman-centric here at TPL, so here's another vid of the Rams OL as they go through a doubleteaming drill


Final video of the day, the Rams tight endss go through some blocking drills. If you listen carefully, you can hear TE coach Rob Boras instructing them: "if the Sam is off, track the inside eye". To explain, he is coaching them that, if the strongside linebacker is playing 'off' (i.e. not on the line of scrimmage), they should follow his inside eye to know where he is moving towards, to ensure that they will be in good position to block him.

To wrap up this part of our report from yesterday's practice, we'll leave you with some interviews with Michael Brockers, Bradley Fletcher, Chris Dahl and Quintin Mikell.

On whether the Rams are view this trip as they would any regular road game:

Totally, it's a total business trip. We come out here, go to work, practising, that's how we're treating it today, like we were in our own facility.

On what makes Tom Brady and the Patriots' offense work:

Just him, he makes that offense go, he knows what to do. He's been running that offense for a while, I'm just a rookie and having watched him on TV, seeing him in Super Bowls, what you can say? The guy's just awesome.

On whether, as a rookie, he gets 'wide-eyed' going against big name players or whether he just treats it as just another game:

Totally [the latter], because we've got guys on our team that get the same publicity so I don't get wide-eyed, I just do my job, do what they pay me to do.

On how they prepare for games:

CD: Each team is going to have guys who are 'hype men', they're always screaming and yelling, doing their emotional breakdowns, encouraging and yelling on the sidelines. Then you've got guys who are just low-key and calm, and can't get themselves in that mindframe because it takes them out of their gait.

On whether they see themselves as hype men or low-key:

CD: I do a little bit but I'm more lower-key, I try to just slow myself down out there.
QM: It's a little bit about position as well, you find that linebackers are more of the outgoing Ray Lewis-types, where safeties and cornerbacks are a little bit more measured.
CD: There's a lot more going on for the secondary, so we're a bit more low-key and not jawing.
BF: We're too busy looking at formations, looking at what they're showing us, see what kind of (looks? Hard to make out this word on tape) that we've been practising over the week.

On the messages Jeff Fisher tries to instil:

BF: The main thing is having confidence, to go out there and play with anybody, beat anybody.
CD: He projects himself with a lot of confidence and addresses players with confidence. A lot of coaches try to install fear in players to get them to elevate their level of play, but not so much with him. He tries to boost you up by giving you confidence. Even experienced coaches I've played for in the past have tried to install fear in players just to dictate the tempo by their sort of mentality. It varies [between coaches], but Coach Fisher is very good at trying at pushing people up with confidence.

(At this point, Fletcher was asked questions addressed just to him, so I grabbed the safeties for some more questions)

On the differences between Fisher and former HC Steve Spagnuolo:

CD: Their personalities are a lot different. I'm not saying one is necessarily better than the other, they're just very different in how they approach [football].
QM: Following on from [the previous question], I think the thing with Coach Fisher is that he's been a head coach in the league so long, he's confident that there isn't anything that he's never seen. I really feel that comes out in his coaching style, where he's really laid back and just brings that confidence [out] in everybody, you just feel good going into gameday.

On the challenges the Patriots' tight ends pose to the safeties, and how they will try to deal with them:

On their reaction to hearing that they were to play in London:

QM: I was excited, I've never been over to Europe so I was excited for the experience, the opportunity to see what London's got to offer. So far so good!
CD: I had played here in 2007 with the Giants, but I didn't get a chance to see a lot of the city so I was excited to come back and do a little more sightseeing, breathe in the culture a little bit more. It's a great place, great sports fans out here, very enthusiastic.