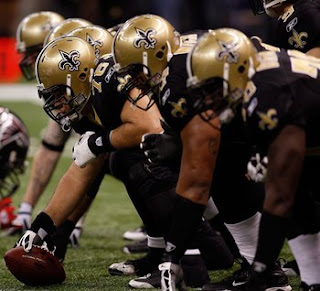 Until the start of the 2012 season, many thought of the New Orleans Saints as having the best offensive line in football. If not, certainly one of the strongest interiors. The pairing of OGs Carl Nicks and Jahri Evans was a formidable one, and undoubtedly gave opposing DTs sleepless nights before games.

This year, however, the Saints team in general has been poor. Really poor. Without Sean Payton at the helm, the team was slumped at 1-4 before week 7, and their offensive line was consistently amongst the worst in the NFL in terms of OLR, our unique offensive line rating system. Perhaps losing Carl Nicks in Free Agency has been key in this (they replaced him with another OG standout in Ben Grubbs), or perhaps running game co-ordinator Aaron Kromer has been having to focus on his role as interim HC too much to give the OL the support they need. Either way, this unit has been poor.

Could week 7 signal a turnaround?

When we look inside the OLR numbers this week, we see that the Saints top the table, with a score of 0.632. This is far and above anything they've put up so far this season, their previous highest total (and their only score above zero before this week once adjustments for strength of defensive opposition has been taken into account) was a 0.118 rating vs the Panthers.

When you look inside the numbers, it's pretty clear to see why they find themselves top.

Facing a Buccaneers defensive front 7 that currently ranks as 12th in the NFL by our scoring system, the Saints didn't allow a single takedown on Drew Brees, let alone a sack. Not only that, but they put up a decent 5 first downs on the ground on just 26 team rush attempts, and recorded a rushing TD by Pierre Thomas. Whilst none of these rushing numbers blow you away, and the fact that they came against a decent defense has bolstered their value, even without defensive adjustment this team would have ranked 2nd for week 7, a real turnaround performance.

This season, we have set out to prove that the offensive line are the most important part of a football team using our OLR statistic. We figure that if a team's OL is key to their success, there should be a strong correlation between their overall record in the NFL and their average OLR score for the year. Whilst we're still a bit short of reaching the half way point of the year, our analysis is already kicking out some very interesting results.

Taking a mental trip back to secondary school geography classes, we're using a Spearman's Rank Correlation Coefficient to investigate if there is indeed a correlation between OLR and NFL record. Don't worry, you don't need to know anything about statistics to understand the link (although I've included them below for those that are interested), all you need to know is that this test will tell us if there is a link between the two. By plugging all the numbers is, doing a few calculations, then realising a computer can do it all for you and going back to the start to do it again, we get the following results: 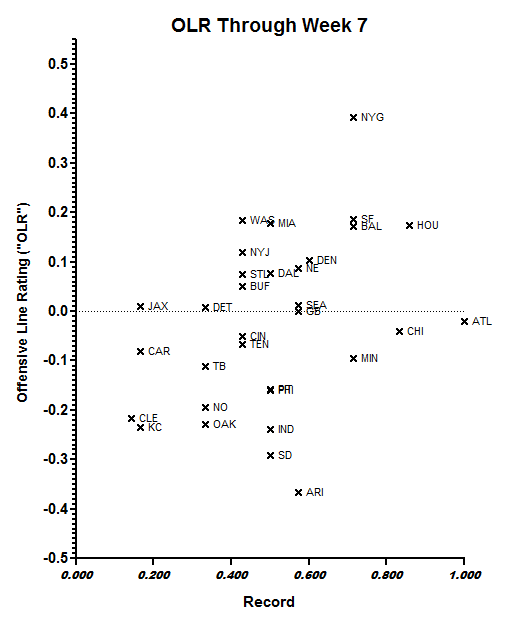 Based on the data so far this season, we calculate that there is indeed a significant link between OLR and teams record, which indicates the play of the offensive line is vital to a teams success.

The chart above supports that finding. As you look further to the right of the graph, the better a teams record in the NFL so far, hence the Falcons finding themselves on the far right at 1.000 as the only undefeated team in the NFL, with the Browns languishing at a 0.143 record and last in the league. The higher up the graph you look, the better the offensive lines have played. As we showed you in week 5, the Giants are still clearly playing as the best OL unit in the NFL, continuing their good showings with an 8th in OLR this week. Down at the bottom is the lowly Cardinals. I'm not going to go on about how poor their OL is playing in this week's analysis, especially as in week 7 they actually performed pretty well, even against a very stout Minnesota Vikings front 7. All you need to know is that they're still the worst in the league.

From our hypothesis, what we expect to happen is that the teams will form a pattern by the end of the season, with the worst teams (and OLs) in the NFL, gathering at the bottom left corner of the graph, and the best teams at the top right, with all the other teams in a relatively straight line between the two. Although they're still pretty spread out, you can see the pattern starting to emerge, with only really ARI and NYG sticking out at either end. Over the remainder of the games we might expect these two teams to move closer to where they should be, either by their OLs starting to perform more like their record suggests, or by going on winning/losing streaks that move their record more in line with the quality of their OL. Certainly in the case of Arizona I'd expect them to keep losing games and end up somewhere near the bottom end of both scales.

If we end this post the way we started it, by considering the Saints, we can see just how surprising their OLR victory in week 7 is. They currently rate as 7th worst in the NFL, and 2nd worst in the NFC, even with this week's big score included. Perhaps this signals a turnaround for the Saints, and just as they're starting to win some games, their OL is starting to perform. Only time will tell, but for now they have earned their spot as #1 team of the week, and hence will adorn our twitter and facebook banners for the next 7 days.

Who'll kick them off top spot next week? Keep an eye on The Pulling Linemen to find out.