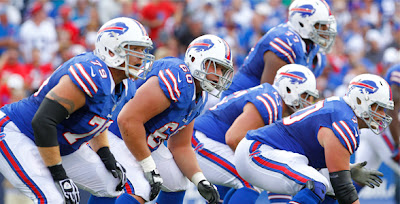 Firstly, I'm sorry for the pun. I know it's awful.

Week 6 of the NFL is done, and a quick look at the performances of the league's offensive lines shows a few surprises, some dominant performances, and some usual culprits languishing at the bottom of the table. That said, our OLR (our unique scoring system for grading offensive line units) top scorers for week 6 are second time victors, and a unit that has found itself consistently in the top tier of performers - The Buffalo Bills.

It was back in week 2 that the Bills first topped the OLR table, a score of 0.836 vs the Chiefs a clear 1st place to back up their #2 finish in week 1. But that was before we started factoring in the strength of the defensive opposition, and interestingly the Bills would have been 3rd in week 2 if we re-evaluated today. In week 6, however, with all things including defensive strength considered, the Bills are top of the pile.


Indeed, strength of oppositions helped the Bills to the top spot this week, as they squeezed past the Arizona Cardinals in overtime thanks to a Jay Feely missed FG and a Ryan Lindell successful kick from 25 yards. The Cards D has been formidable for much of 2012 so far, disrupting Brady and the Patriots in week 2, terrorising Vick and the Eagles in week 3, and recording 19 sacks so far on the year, good enough for 3rd in the league. In week 6, however, the Bills were able to control them, move the ball on the ground, and protect Ryan Fitzpatrick long enough for him to complete at least a few passes. The real take home numbers from the matchup, and the reason the Bills come out top of OLR for week 6, is a YPC of 5.0, 2 rushing TDs (one each for CJ Spiller and Fred Jackson), and 9 rushing 1st downs (vs just 2 negative runs).

Perhaps the most impressive factor in the Bills score this week is that they are dealing with a number of injuries along the OL unit. Rookie LT Cordy Glenn and RG Kraig Urbik were both out for week 6 with ankle injuries, with C Eric Wood and backup RG Chad Reinhart also hobbled by foot and calf issues respectively. Despite missing starters and being forced to rotate a 3rd string LT into starting at RG to cover for Reinhart, the "Wolfpack" as this unit has been dubbed was able to rally, allowed only 2 sacks against that Cardinals front 7, and need to be considered an integral part of why the Bills are part of that 4-way tie in the AFC East.

This weeks top 4 teams all really have defensive opposition strength to thank for their lofty positions in the OLR table this week. Whilst the Bills were able to neutralise the Cardinals DL threat, the Redskins managed to run all over the Minnesota Vikings D including (and slightly inflated by) that game winning RGIII run of 76yds for a TD, the Rams put up a season high of 6 YPC and scored their first rushing TD of the year against the league's best front 7 in Miami, and the Patriots, despite being a traditionally strong unit anyway, managed to keep Brady relatively clean against the Seahawks' dangerous pass-rushers, even if their running game didn't really put up numbers to write home about. Had we not started adjusting our scores to account for defensive strength these top 4 teams would have come in at 7, 8, 11 and 15, with the New York Jets topping the table as the #1 team.


Sadly for the Jets, their excellent performance in week 6 came against a godawful defense in Indianapolis, otherwise they'd be sitting pretty atop of the table, a place they haven't seen since week 1 and their scoring-for-fun game against the Bills. In their 35-9 win this week the Jets put up a huge 252 yards on the ground (5.7 YPC), 3 rushing TDs, and allowed only 1 sack, some of the best numbers of the season so far. However, their OLR took a big hit (falling from 0.555 and 1st place in the unadjusted ranking to 0.254 and 10th place above) thanks to the Colts defensive front 7 being horrible - currently 25th in the NFL by our rankings. 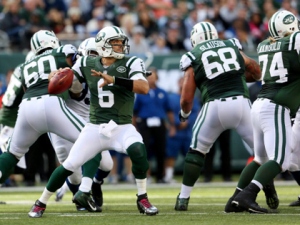 Another Colts unit that was horrible this week was their offensive line, grading out as the worst in the league in OLR in week 6 with a nasty -1.370 score. Only 41 rushing yards, not a single first down on the ground, and 4 sacks of Andrew Luck by a Jets D that had only recorded 5 sacks in total through the first 5 weeks.

This terrible performance from the Colts is the only thing that keeps the Cardinals off the bottom spot for the first time since week 3. The Cardinals run game actually found some rhythm this week behind William Powell, and recorded a heady YPC of 6.0, but once again their protection of their QB was dire. 8 QB takedowns allowed, 5 of which were sacks, and one of which finally broke Kevin Kolb's spirit and ribcage, is not a good set of numbers. It's even worse when you consider the Bills have the worst defensive front 7 in football, 32nd by our scoring system - a fact that  nullifies the Cards rushing day, seeing as 4 out of 6 teams this year have recorded YPCs of 6.0 and over vs the Bills. I'm sorry Cardinals fans, I wish I had better news to report, especially as here at TPL we love Daryn Colledge, but your OL unit just flat out sucks.

Stay tuned for more OLR analysis in the coming weeks, including a look in at how the OL units are performing over the season so far, where we see there is a very clear front runner for OL of the Year emerging already.

- Phil Gaskin (@sosayitisaid)
- The Pulling Linemen
Posted by Writers at 09:20