As we showed last week, OLR is a stat that can be influenced hugely by the strength of an opposition defense. When Green Bay, an offensive line unit that has consistently ranked amongst the worst in the NFL, came out top in week 4 thanks to facing a terrible Saints front 7, it was clear we needed to introduce a defense factor into the OLR calculations.

And so we have.

This week sees the first OLR statistics that factor in the strength of the defensive front 7 based on their performance through the first 5 weeks of the season, and straight away we can see the effect of this new addition on our top 5 scorers from week 5. Although as sods law would have it, one team's OL performed so well in week 5 that even a weak opposition couldn't drag them out of the top spot.

That's right, our week 5 OLR top scorers are the Giants. A huge run game from Ahmad Bradshaw combined with allowing no sacks and only one knockdown of Eli Manning gave the Giants a massive OLR of 1.434 before adding the Defensive Factor, but even with the Browns lowly defense accounted for (currently ranked 26th in our calculations), the Giants lead was unassailable.

It should be no surprise to see NYG atop the table finally, as in the past 3 weeks they've ranked 6th, 8th and 4th, including games where their number 1 running back has been hobbled through injury. Now with Ahmad Bradshaw back rolling, and Eli Manning still just as elusive in the pocket, the Giants OL is set up for success, and their week 5 win earns them their spot on our twitter and facebook banners for the week. And it's not just their week 5 rating that is reason to celebrate for the Giants, take a look a little later for their position in the OLR rankings for the season so far...

Perhaps the biggest surprise in the top 5 this week is the Rams. Their offensive line has been decimated by injuries and poor drafting in recent years, and their current starting lineup really only boasts Harvey Dahl as a true top level O-Lineman. Their OLR scores to date have really reflected this, rarely escaping the bottom 7-8 teams, but this week with the Defensive Factor included they find themselves at #5. In 2012 so far the Cardinals defensive front 7 has been excellent, disrupting the Patriots, terrorizing the Eagles, and almost single-handedly dragging the Cards to what was a 4-0 record. Because of this, their defensive front graded out as 2nd in the NFL prior to this weekend according to our calculations. In week 5, however, the Rams OL was able to handle them significantly better than the teams that have gone before them. A YPC of 3.5 is nothing to shout about, and neither is allowing 6 QB knockdowns, but when you see these are the 2nd best scores in both categories against the Cardinals this season you begin to appreciate the job the Rams did. Without adjustment, the Rams OL scores -0.103 this week and ranks 14th; with adjustment its 0.386 and 5th.

Of course, this wouldn't be an OLR article if I didn't mention how dire the Cardinals line have been. Last again this week, allowing 9 sacks to the Rams, and rushing for just 2.6YPC. With Ryan Williams potentially joining Beanie Wells on IR, the run game isn't likely to get a boost any time soon, and this unit will have to improve drastically if it wants to stop being a shoe-in for worst in the league.

This week we also see a big swing in fortunes for two teams that faced each other in week 5 - the Ravens and Chiefs. It's only 2 weeks since the Ravens were cream of the OLR crop, finishing week 3 as the number 1 team in the NFL, whereas the Chiefs have languished in mid to lower table all season. However, their 9-6 shootout in week 5 saw a switch in the numbers we might expect from the two teams, with the Chiefs ranking 8th on 0.206 and the Ravens at 24th on -0.306. Of course, their relative defensive front seven strengths do come into the calculation (Ravens 15th, Chiefs 20th), but even without this the Chiefs outperformed their AFC opponents in this matchup. No sacks allowed by the Chiefs compared to 4 by the Ravens, 12 rushing first downs compared to 6, and 210 rushing yards compared to 133. Of course, the Chiefs OL is going to have to be better than previously now; with Haloti Ngata having broken Matt Cassell in half they'll be trying to keep backup QB Brady Quinn upright instead.

The Season So Far - Who's The Best in the NFL?

With five weeks in the books, and our new defensive factor included in the OLR calculations, it's a good time to look at the season as a whole to see which OL units have performed best over the course of the season, and to test a little hypothesis. A common ethos amongst OL huddles up and down the country is that matches are won and lost on the O-Line, the "skill" positions are just responsible for the margins of victory. With OLR, we aim to test that hypothesis, but comparing NFL record with OLR score to see if there is any correlation between the two. If the trench battles really are the most important factor in a game, we can expect to see a close relationship between record and OLR, but if other things are more important - like a having an elite QB, a gamebreaking RB/WR, or a lockdown defense, then we can expect to see a much loser relationship. Of course, the season is still young, but after week 17 we might just have an interesting result. 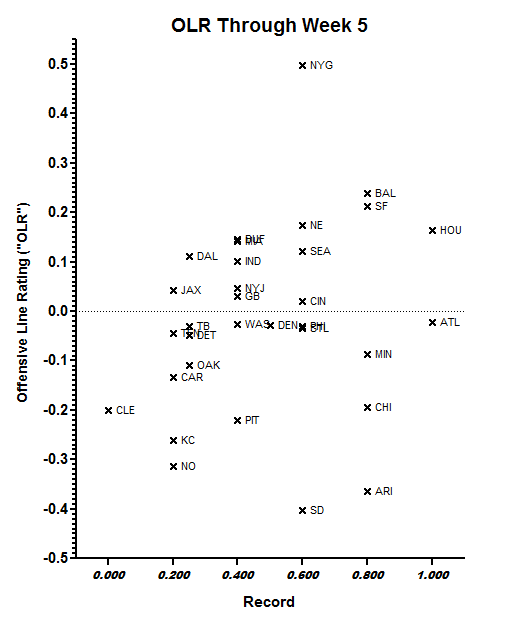 As you can see, the Giants are clearly the top OL in the NFL so far this year, thanks to both their consistently strong performances, and their tough schedule so far in terms of defensive fronts faced. Following them we have the Ravens, 49ers, Texans and Patriots, each of whom have performed consistently well throughout 2012. Is it a surprise that all of these top 5 teams are above .500 through 5 weeks? Perhaps not if our hypothesis proves right...!

At the other end of the spectrum we find the Chargers and Cardinals at rock bottom. For two teams that are at .600 and .800 respectively, it's shocking to see their scores so low. The Cardinals of course have been carried by their defense so far, with their offense barely winning games behind that OL. Perhaps as the season goes on their record will start to slump to reflect their OLR score. On the other hand, maybe their OL will improve and play up to the level their D has set.

Keep an eye out through the season as we look how the scores so far evolve, and test whether our hypothesis rings true.

- Phil Gaskin (@sosayitisaid)
- The Pulling Linemen
Posted by Writers at 16:49