After an iffy week 6 everyone bounced back well in week 7, with Toby and TomTom Sports going 12-1, missing out on a perfect week by 2 points thanks to the Bills allowing Chris Johnson to run all over them.

With all the NFL Wembley coverage going on this week that Toby is unfortunately unable to get to, he's made the Patriots @ Rams game his Game of the Week, outlining what is needed for either team to come away victorious. You can see that, plus our guest game of the week and our week 8 picks below...

It's finally upon us this week. Phil and I have been waiting all year for our teams to come over here and play. What seemed like a very one-sided game when it was initially booked, is now looking very tasty. New England have struggled in their recent games, throwing away 4th quarter leads and miss-handling the game clock in crucial situations. Meanwhile St. Louis have been a tough out each and every week and sit at 3-4 in a very tough NFC West that has already gone 0-2 against the Patriots this season. So let's take a look at what it will take for each team to win the annual International Series game: 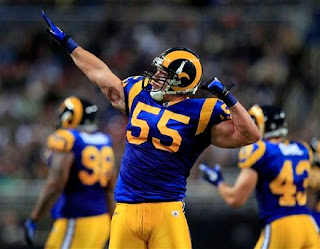 Gur's spent some time talking to Rams players this week, including their middle linebacker James Laurinaitis, who said: "you have to try and force turnovers, steal possessions away from them, give your offense more possessions. It sounds cliché but football's pretty simple, you've got to force turnovers and do things that benefit your team".

Laurinaitis isn't wrong, the turnover battle will be absolutely key. New England have just 7 giveaways this season (3 INT, 4 fumbles lost) and the Rams have just 9 takeaways. However, 8 of those are interceptions, and all of Brady's 3 INT's have come against the other NFC West teams. Could we see St. Louis pick off the great #12 once or twice? I'm not going to say it's impossible. The Rams defense has greatly improved its cornerback play with Cortland Finnegan & Janoris Jenkins, and the Patriots are having issues with outside passing, particularly to new acquisition Brandon Lloyd, who is connecting on just 54% of his targets. With Brady still forcing the ball to him (65 targets in 7 games) the physical play of Finnegan could easily disrupt this iffy combination.

After Lloyd, there's the big three of Wes Welker, Rob Gronkowski and Aaron Hernandez. St. Louis really don't have the personnel to cover these guys (Who does?), but we've seen that all 3 have had their issues. The Patriots still move away from Welker at times, much to the detriment of their offense, and injuries have really slowed Gronkowski & Hernandez so far. But the best way to remove these guys is to get after Tom Brady.

DE's Robert Quinn and Chris Long have combined for 11 sacks so far this year, and the Rams have 21 in total. With New England's new look offensive line, and carrying injuries to both of their starting guards All-Pro Logan Mankins & Dan Connolly, Brady has been under more pressure this year than he's used to, and it's starting to show especially late in games. If the Rams can bring the noise against Brady, and move him off his spot, then they'll have a chance to slow the Pats offense down.

On offense the Rams need to be aggressive and throw the ball down the field. The Patriots secondary has been woeful all year and has made opposing QB's look very, very good. New England, despite an improved pass rush, are allowing 290 yards a game in the air and have a QB rating of 99.2 against them. When you consider that includes games against Kevin Kolb, Russell Wilson, Jake Locker and Mark Sanchez we could easily see this iffy Rams passing attack, still without it's best receiver Danny Amendola, put up good numbers and big points.

However they will need to stay balanced and slow the game down to try and keep Brady off the field and their defense fresh. Stephen Jackson and Daryl Richardson have provided a steady ground attack, going at a combined 4.23 yards a carry. New England have a very stout run defense from their base defense, but if the Rams can get them into sub packages and have success running against their nickel and dime defenses then it will really slow down the Patriots pass rush and allow Bradford to expose them deep.

This one seems a lot more plausible. After all, when you've got Brady, a good run game and a top level run defense it shouldn't be hard to win games, let alone as hard as the Patriots are making it seem this season. Firstly, they need to keep their foot down on offense in the 4th quarter. They've been outscored 34-6 in their last 3 4th quarters, and partly this is because they've changed offensive philosophy when leading by double digits in the 4th quarter. They slowed the tempo right down, lent on the run when the defenses were stacked to stop it, and it's been easy to stop.

If the Patriots can keep feeding the ball to Welker, Gronkowski and continue to pick their run matchups carefully, then their 4th quarter offense should turn around. It seems to me like they're purposefully trying to eat clock early on in the 4th to keep the defense off the field when the opposition are going to be moving into full pass-wacky mode. In my eyes this is wrong, the Pats should stick to what their good at with their 4th quarter (and particularly 4 minute drill) offense, and if they do, then Wembley could see a lot of points.

On defense, the Patriots need to try, somehow, to protect their secondary. With rookies Tavon Wilson and Nate Ebner playing large roles at safety due to injury, and Devin McCourty continuing last years struggles at corner has meant that New England have been just awful against the pass, and especially the deep ball. St. Louis' offensive line is very shaky, and rookie Chandler Jones and the big guys in the middle could have some joy against them. But I'd like to see a little more use of Jermaine Cunningham, who has made mincemeat of guards when he's been lined up inside on obvious passing downs. If they can work him into the game more they could generate some more four player rush pressure, which would certainly help their secondary.


Obviously, I'm picking the Patriots in this one, but there are more and more flutterings of doubt around this team. Doubt that no lead is safe, that Brady is sliding from his elite status. That Belichick is losing it with clock management and 4th down decisions.

It could be close. It has the potential to be very close, the Rams have only been blown out in one game and that was by perhaps the best defense in the league. St. Louis play hard, in your face defense and are methodical on offense. I wouldn't be that surprised if New England flew home at 0-3 vs. the NFC West. But as James Laurinaitis said, they'll have to get turnovers and gain some possessions for their offense.

What is the point in this? There is only one game of the week this week and, in a display of grand nepotism, Toby Durant has done it. That's right I am lifting the lid off of this sordid den of back-scratching, glad-handing and general corruption. Never in all my life...

Okay I will play ball. But beware I do this in fear of the Linemen getting their now close personal friends, the St Louis Rams, to beat me down with Road Warrior Animal's son.

My game of the week for week 8 is New York at Dallas Cowboys. A match-up between the Super Bowl champs and America's team is always a fantastic occasion. The big match up here is between Tony Romo and the New York secondary. Will Romo be Tony Soprano or Rubbish Romo?  I think the latter but that is just me. Dallas always has the chance to be a Super Bowl contender but rarely achieves. It must be infuriating for Cowboys fans who see the roster on paper and sees a great team. Good QB RB and WR with a sold defense. Why don't they win? I do not have a reason for this except their own ineptitude and hype.

At the moment my MVP for the season is Eli Manning and it is always a roller coaster riding along with the two-time Super Bowl Champ. Inconsistent when it doesn't matter and sublime when the game is on the line. He has a fantastic weapon in Victor Cruz and he needs to utilise him before he gets paid and falls of a cliff into obscurity. The Giants defense is solid and Jason Pierre-Paul might be the second best defensive player in the league at the moment. He is a joy to watch.

This game should be a high-octane, high scoring game with plenty to shout at the television about.I won't be watching the game as I have a ticket to the real game of the week and so will probably watch this one when I get back to Manchester on Monday.