Five(ish) Plays that Paid Off - Week 4: Bush It to the Limit Apologies for how late these Plays that Paid Off have come! Unfortunately, real life has gotten in the way this week with familial duties, so will likely have to put most of Week 4's breakdowns up next week. Still, at least we got one off this week! This play comes nominated by Greg Roscow on Twitter, who nominated two plays in one tweet. If I have time, I may look at the Manningham run (though there is a different play from that game that I will break down when and as I can get to it), but for now, we'll focus on Reggie Bush's 21-yard effort that started a drive ending in Miami's first touchdown of that game. After explaining how outside zone run blocking works last week, this play gives us an opportunity to explore its cousin, the inside zone. Enjoy!


After the huddle/pre-snap: The Dolphins line up in a variation of the Power-I, a version of I-form where one of the receivers is substituted for a fullback, who lines up outside the regular fullback. This particular variation of the Power-I is technically a single-wing formation, with the second fullback actually lining up next to the TE as an H-back; however, as the term 'single-wing' is normally used only when referring to the formation 'Pop' Warner used with an unbalanced line, it is better to find a different term for it, even though single-wing would technically be correct. The formation shares many of the characteristics of the Power-I, so that's what I've plumped for. Anyway, the Dolphins line up with the backfield in I-form, both the TE and the H-back to the right, and the lone receiver on the left. The Cardinals line up with the front seven in a typical 3-4 alignment, with the SLB heads up on the TE. SS Adrian Wilson has come down to cover the H-back, while left corner William Gay lines up outside of Wilson, turned into the formation. On the other side of the field, Patrick Peterson is lined up on the LOS pressing Nannee, while Rhodes is the single high safety. The field now looks like Fig 1.


The play: The play is an inside zone run to the weakside of the formation. We have discussed in the past the 'outside zone' blocking scheme; philosophically, the inside zone is largely identical - the departure comes in the technique. As with outside zone, in inside zone the entire offensive line (and, in this case, the tight end and H-back too) move as one unit, either to the right or the left (to the left, on this play); however, unlike outside zone, in inside zone blockers attempt to get inside leverage on their assignments, and block them towards the sideline. On this play, Long and Incognito block to the two defenders in their zone - Acho and Campbell, opening the 'A' gap wide as Pouncey and Jerry doubleteam the nosetackle, Williams. The first man through the play hole is fullback Lane, who meets Washington in the hall with a thump, then getting his hands up and blocking him to the outside ('A' in Fig 2).

It is important to mention that while the play occurs as drawn in Fig 2, the whole play is shifting to the left as it happens, as you would expect form a zone play; thus, the players are actually more spread out than is shown on the board, as it is hard to indicate the movement to the left by the players on a static whiteboard - so, apologies if it's all a little squished, but its why these diagrams are only rough guides, to be used in conjunction with the video of the play, linked above. 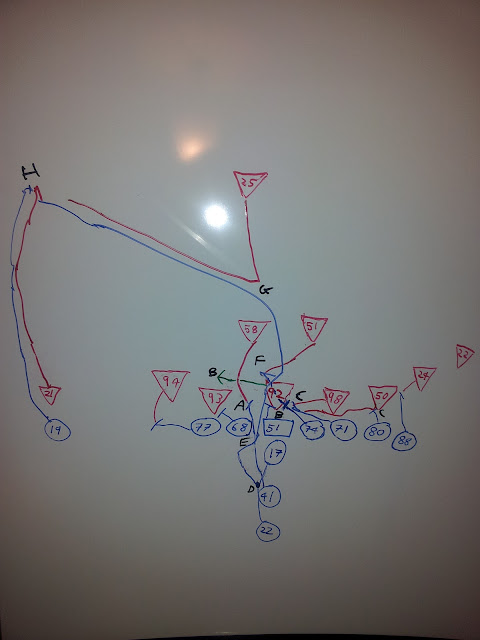 As mentioned above, Pouncey and Jerry are doubleteaming, or 'zoning', on Williams. As with the outside zone, the inside zone regularly sees doubleteams along the line; unlike in outside zone, where the backside OL 'takes over' the block for the playside OL (who then proceeds up to the second level), the two OL remain doubleteaming the defensive lineman in the direction of the play until they reach the second level. When a second level defender (typically a linebacker, though occasionally a safety or other defender) attempts to run either side of the doubleteam, the OL on that side 'peels off' the doubleteam, picking up the second level defender, while the other OL maintains the block on the defensive lineman. In this play, Pouncey and Jerry doubleteam on Williams, then drive him far across the play, as indicated by the green arrow (both the double team and the arrow are also marked 'B' for clarity).

When you hear the expression to fall "ass backwards" into something good, it's very rarely literally the case. It is, however, the case at point 'C'. Rookie right tackle Jonathan Martin appears to be trying to move inside of Nick Eason, rather than blocking him, but Eason uses his arm to keep Martin at bay, eventually spinning him round so that Martin's back is towards him. At this point, Tannehill has handed the ball off to Bush (point 'D') and the tailback has, after chasing the B-gap, cut back inside, turning downfield inside of his fullback's block on Washington (point 'E'). The only thing preventing Eason from tackling Bush is, ironically, Martin's backside, which is presented to Eason on account of Eason causing him to turn round. Martin's derriere not only blocks Eason out of the play, but also, as he turns further round to try and face upfield, blocks Schofield from getting to Bush. There are not many offensive tackles who can block two defenders on a single play using only their rear ends, but Martin somehow manages it.

Now, to return to the doubleteam of Pouncey and Jerry on Williams. The two have driven Williams far left, well past the play hole. Paris Lenon reads the play and tries to stay over the play hole in order to be in position to make the stop. Seeing this, Jerry, the closest play too him, 'peels off' the doubleteam, leaving Pouncey to seal in Williams, and moves up to block Lenon (point 'F'). This is a key element of the inside zone; when Jerry doubleteamed with Pouncey, he effectively closed his zone (i.e. the playside gap, to his left), allowing him to drive Williams together with Pouncey. By driving Williams towards where Lenon ends up, they effectively end up with both defenders within their assigned zone; thus, by Jerry peeling off and picking up Lenon, they have taken care of both defenders in their zone. Once Bush has gotten through the play gap, sealed off by Lane on Washington and Martin (and his ass) on Eason, he sees Jerry blocking Lenon to the outside, and cuts inside of him and runs towards Rhodes.

Bush reaches Rhodes, then quickly cuts the sideline ('G'), attempting to run behind Nannee blocking Peterson ('H'). However, Nannee does a poor job of blocking, not really putting much effort in, and Peterson easily gets off the block and tackles Bush for a gain of 21 yards. Had Nannee put some effort into his blocking, the play could quite easily have gone for a 95-yard touchdown - perhaps part of the reason he was waived following the match.

As always, please nominate plays this week to be broken down, either by tweeting a description of the play with the hashtag #TPL5plays, or nominating it in our Facebook group.