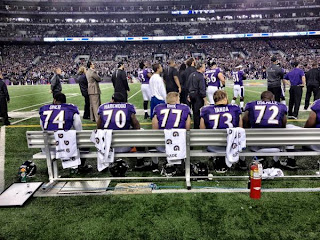 With week 3 of the NFL in the books, it's time to check in on the OLR rating for each team and have a look at how they performed. In previous weeks we've seen how the New York Jets dominated in week 1, before being surpassed by the Buffalo Bills to the OLR Weekly Title in week 2. Whilst neither of these teams was a disaster in week 3, the Jets had a fairly anaemic running game once again, and the Bills finally allowed their first sack of Ryan Fitzpatrick for the season, and so neither team makes it to the top of the pile. Indeed, only one of the previous winners scrapes into the top 10! This week we have a new #1, and with a score that beats anything we've seen previously, they can be very proud of their achievement.

At the other end of the table, there are some very obvious (and increasingly regular) selections who, if you watched any of their games at all, will see just why they're rooted down in the late 20s and 30s of this all-NFL ranking. For a full breakdown of the week scores, check after the jump.

As the title (and perhaps more likely the picture) may have given away, this weeks top ranked offensive line unit are the Baltimore Ravens. After finishing in the top 10 in both the first two weeks, they truly dominated on Sunday Night Football, pushing a stout Patriots D-line about, and keeping Joe Flacco upright (almost) all night. Officially, the stats say that Flacco wasn't taken to the ground once during the game, either on a sack or a hit, but of course there was the sack by Chandler Jones that was ruled out thanks to defensive holding. That said, the Ravens run blocking was just as deserving of this #1 billing. 4.65YPC on 26 carries is a decent total (7th in the NFL in week 3), but combined with the consistency of 6 rushing first downs vs only 1 negative run all game really sets them apart. A score of OLR=1.135 is the best we've seen through 3 weeks of this NFL season, and one that will be hard to beat.

It's clear now, as we find out as much about OLR as you do with the passing weeks, that having a balanced offensive line is incredibly important in OLR. Although you can record a good score by a consistent, solid run game (like Minnesota did in week 3), or with a pass-first approach that requires good pocket protection for the QB (see Detroit), the real high value comes from doing both exceptionally.

The Ravens OL did everything well in week 3, and their photo will take its place on our Facebook banner this week to signify their OLR win.

Not All Bad in SD

The Chargers fell to their first defeat of 2012 with a humbling at home thanks to the now 3-0 Falcons. Scoring only 3 points in the game, and offensively looking weak at best, it is a little surprising to see their O-line ranked #4 this week. A quick look inside the stats, however, shows why. Behind early, and what became all game, the Chargers were forced to turn away from what was a slowish start running the ball. Ending with just 17 carries, their average would have been somewhere in the region of 4.5YPC were it not for the breakaway run from Jackie Battle, whose 52 yard rumble pushed the Chargers YPC up to 6.8. Whilst this undoubtedly elevated SD a little higher than they may deserve, their pass-pro was not bad at all, giving up only 1 sack on 38 pass attempts, when they were facing 3rd-and-long situations consistently thanks to terrible play from basically everyone else on the Charger offense. Yes, maybe Jackie Battle's run bolstered the OLR score a little higher than deserved in week 3, but don't think that just because the Chargers' "skill" players struggled in this game, that the O-Line didn't perform well enough for them to at least be competitive.

If it hadn't been for the worst ending to MNF possibly in history, the story coming out of Seattle could have been their pass rush and how they beat up on the Green Bay OL for the first half of the game. What will get lost amongst the chat about the biggest mistake of these replacement refs (hopefully) short careers is that the Seahawks managed to sack Aaron Rodgers 8 times in the game, with a total of 12 QB hits. Rookie pass-rusher Bruce Irvin just ate Bryan Bulaga's lunch on at least 3 occasions, and Chris Clemons recorded 4 sacks of his own in one quarter, beating Marshall Newhouse outside, and stunting inside with the Packers interior of Lang-Saturday-Sitton often double teaming him. For an undoubtedly pass first offense like Green Bay, protection for Rodgers is key, and whilst a lot of credit can go to the Seattle DBs for excellent coverage forcing Rodgers to hold the ball longer, the OL absolutely has to do better. I found myself writing exactly the same about this unit last week after the Bears defense gave them problems. It's starting to become a habit.

Live and Die by Your QBs Legs

In week one I postulated that having a QB with a tendency to go running, either by design or choice, will be a key factor in OLR. This week is perhaps a good time to illustrate why, although extending the play might earn you fewer sacks and a higher OLR (like Washington scored in week 2), moving around inside, and out of, the pocked might just have you killed and make your OL look awful (like, ummm, Washington in week 3).

It's fair to say that a QB who presents a running threat as well as passing makes for exciting watching, and also creates a bit of a nightmare for opposition defensive coordinators. In week 2, the Rams weren't ready for the rushing threat of RGIII, who scored twice on the ground, helped the team to 6.1YPC, and was only sacked once by an aggressive St Louis front. It gave the Redskins a great OLR score of 0.282 and 7th in the league that week. Come week 3, however, and RGIIIs running left him exposed. On an option play to the right, Carlos Dunlap didn't bite, and ploughed through the rookie QB causing him to fumble the ball, which eventually led to a Bengals TD. Pressure up the middle, which RGIII had been able to use his legs to escape from (and had hidden inadequacies on the OL previously), was unavoidable this week - and the Skins finished with 6 sacks allowed on 15 QB hits, dropping their OLR to -0.125 (21st) despite a 6.3YPC and 2 rushing TDs. Whether the OL unit is actually a top 10 contender in the NFL like their weeks 1 and 2 scores suggest, or a bottom half also-ran like week 3 is yet to be seen, but it's clear from this weeks result that if RGIII is left to do it all by himself, he (and they) stand no chance.

What may be in store for the Skins and RGIII is an OLR like Philadelphia this week, which goes to show what happens when your mobile QB not only gets blasted all game, but also can't contribute with his legs. The Eagles scored -0.462, a season low for them by quite some margin. Against a dominant Cardinals D-line, 5 sacks, 14 hits, and just 4 carries for 28 yards were all Michael Vick had to show for his efforts, aside of course from his fumbles. No Jason Peters and now no Jason Kelce makes this Eagles OL unit look bad. And I mean scary bad. The Arizona front 7 is excellent, no question, but any time your offense looks this bad you should be worried.

The final word goes to Arizona and their awful OLR in week 3. "How?" you ask, "They did beat the Eagles convincingly." Yes, they did, but not thanks to their O-Line. 2.9YPC is good enough for 27th in the NFL, and 8 (yes, eight) negative run plays compared to just three rushing first downs is terrible. And that's even after you take out Kolb's two kneels to see out the game. They also didn't score on the ground, and allowed 3 sacks (4 total hits) of their QB. All in all, nothing catastrophic about these stats, but unfortunately not a single redeeming feature either.

If you enjoy our OLR analysis keep an eye on TPL this week as we'll be taking a lot at the season so far and seeing which team has been consistently the best unit through 3 weeks and start to investigate whether it really is the OL who are responsible for winning the game.

- Phil Gaskin (@sosayitisaid)
- The Pulling Linemen
Posted by Writers at 13:01