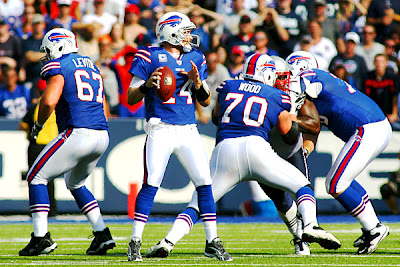 When we introduced OLR to the world last week, we didn't expect anywhere near the kind of response we got. Our new Offensive Line Rating system, scoring each unit based on 6 simple stats, went down like a house on fire, and we got a load of great feedback - including some excellent and useful constructive criticisms. We're certainly working on improving the OLR over the coming weeks, perhaps to include the penalties conceded by offensive linemen, but for now let's take a look at the OLR scores from week 2 using the current system, and see why people need to start giving the Bills some genuine credit.


Yep, there they are, #1 in the NFL for their performance in week 2. Why should that be any sort of surprise, I mean they were 2nd last week, despite their defeat at the hands of the Jets? Some said our rating of the Bills so highly last week was an anomaly, probably because the team did get soundly beaten by the Jets, but a simple glance at the stats from the first two weeks of this season, as well as the entirety of 2011, will show that the Bills really do deserve to be in any conversation about the better OLs in the NFL.

In 2011, the Buffalo Bills finished first in the NFL in sacks allowed, with a meager 23 (averaging less than 1.5 per game), and they've started 2012 in the same way, as the only team in the league to not have conceded a single one so far. That, at the very least, should show that we're dealing with a stellar pass-blocking unit. They also ranked amongst the best rushing teams in the NFL last season, with a YPC average of 4.9, which although partly due to excellent rushing from Fred Jackson, can certainly be partially attributed to the OLs skills. That is more than amply demonstrated by the Bills running game so far in 2012: 396 yards, 3 rushing TDs, 6.4 YPC, most of which has been done without their #1 RB. Of course, as the season goes one we'll see how the OL unit (and their OLR score) develops, but for this week at least they sit atop the pile.
If you watched any of Thursday Night Football, you would've seen just how poor the offensive line play was. Neither the Bears nor the Packers were able to protect their QBs whatsoever, with a total of 12 sacks in the game - Cutler taken down 7 times and Rodgers 5. Combine this with neither team finding the endzone on the ground, and mediocre YPC averages, and the teams come out with -0.332 for the Packers (currently 26th), and -0.694 (currently last), both horrible scores for teams with ambitions of playoff football.

Another unit who suffered a lot this week was the Patriots. Of course, the Cardinals do have a decent front 7, with Darnell Dockett and Calais Campbell a force on the LOS, but the right side of the Patriots OL in particular looked poor this week. Missing Dan Connolly at RG was clearly important for New England, as they allowed 4 sacks of Tom Brady, and had a total of 5 runs for a loss, ALL 5 of which were to the right. When you compare their Week 2 OLR of -0.312 (good enough for 24th) to their week 1 performance of 0.235 (5th in NFL), you can see how much of an off-day this unit had.

One unit that I think deserves a positive mention is the Rams (definite homer move from me). Their score of -0.050 is the definition of mid-table mediocrity, but for a line that has been so traditionally awful, this is something of an achievement, especially when you look at the injury troubles they have suffered. They traded away former #2 overall pick, and disappointment, RT Jason Smith, before the season. LT Rodger Saffold got injured last week, made a miraculous return for this week, then got injured again. Starting C Scott Wells has landed on IR with a foot fracture, and the new starting LG Quinn Ojinnaka only returned to STL this week after being cut before week 1. To put in a performance of 5.6 YPC on 27 carries against the Redskins (most of which came from 7th round rookie Daryl Richardson), and allowing only 2 sacks to a very solid defensive front 7 is commendable, and played a big part in the Rams victory over Washington 31-28.

Keep an eye on TPL over the next few days for more week two analysis, including Five Plays that Paid Off, and our Rookie QB Watch!

(Edit note: Following MNF, the OLR scores of the Atlanta Falcons and Denver Broncos were calculated. The Falcons scored -0.076, thanks to decent play by Sam Baker and Tyson Clabo against two serious pass-rushers in Elvis Dumervil and Von Miller, but a poor running game. They rank 19th in week two. The Broncos performed slightly better, with an OLR of 0.032, placing them 15th. A strong rushing performance from Willis MacGahee was key for them, as Peyton Manning took 6 hits, 3 of which were sacks, in the pass game)