Five Plays that Paid Off - Week 2: The Inconvenient Trey 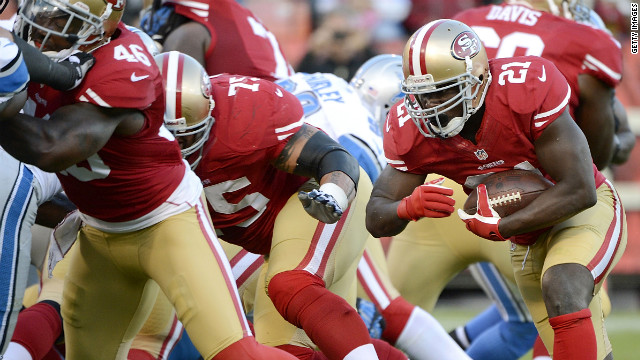 So far in our Five Plays that Paid Off series, we've broken down a punt returned for a touchdown, a fake field goal for a touchdown, and lots and lots of play-action passes - but now, we finally turn to every lineman's favourite part of football - the run game. Being an offensive lineman is, at its heart, about imposing your physical will on people, literally taking them in your hands and forcing them to go wherever you want to take them. If you've never played the position, it's hard to describe that rush of euphoria that only comes from manhandling a 300-pound defensive lineman and putting them on their backside, an act of physical dominance that screams out to man's most primal core.

The play in question comes from last week's Sunday Night Football, a variation of the counter-trey run play that the Washington Redskins rode to Super Bowl XVII. This play illustrates how true it that old cliche of football being a chess match between coaches can actually be, as San Francisco uses the Lions' formation against them in an excellent showcase of blocking execution.

After the huddle: The 49ers line up in their jumbo set - two tight ends with an H-back to the strongside (with one of the TEs and the H-back being offensive linemen reporting in as eligible), with DE Tukuafu in at fullback. The Lions respond with their own heavy goal-line D, with four DTs lining up on the inside of both guards and both tackles (essentially to plug both A and both B gaps), two DEs lines up outside the formations tilted to the line (theoretically to aid penetration into the backfield), backed up by four linebackers and a single safety, who is lined up across from the H-back. (Fig 1)

Pre-snap: H-back Kilgore motions infield (shown by the dotted line in Fig 1); Coleman moves with him, suggesting he is in man coverage on Kilgore. Kilgore then moves back outside, setting up between the right tackle and the right tight end; Coleman likewise motions back across, but actually sets up back in his original position, rather than directly across from Kilgore.

The play: With the ball so close to the goal line (represented on the diagrams by the green dashed line), the Lions are set up to defend against a straight-ahead dive by one of the backs, or even a QB sneak, by essentially lining up a defensive tackle in each of the A and B gaps. Detroit likewise appear to be preparing for the possibility of a Power-O or off-tackle run to the strong side, by having the SLB line up on the LOS (compare with the WLB, who is standing off the LOS), and by having the lone safety in man coverage on the H-back, ensuring - in theory - that the Lions will be overloading whichever side ends up being the strong side after any pre-snap motion. Unbeknownst to the Lions, by aligning themselves in this way, they have actually set themselves up exactly where the 9ers want them.

The play itself is a variation of the counter-trey that was made so famous by the Redskins sides of the 1980, with John Riggins running behind the legendary "Hogs" offensive line. The counter-trey is a form of counter-trap (where the running back fakes in one direction, then cutting back to the opposite direction; most of the offensive line will down-block (i.e. block defenders along the LOS, away from the play-gap, instead of driving them backwards) towards the initial direction, leaving the end man on the line of scrimmage unblocked, but one lineman, typically the backside guard, pulls in the opposite direction and into that unblocked DL, sealing him outside and thus creating a huge hole for the running back). The counter-trey differs in that it features two pulling linemen, typically one to seal the end man on the line of scrimmage as in the trap, and a second to then act like a traditional lead blocker.

This particular play features the basic elements of the counter-trey - two pulling blockers with the rest of the OL down-blocking - but features a few differences, mostly because the Lions have aligned themselves in such a way as to actually allow the 49ers to have even more secure blocks on the defense while allowing three lead blockers.

I've broken the play down into two key elements, labelled 'A' and 'B' in Fig 2. The first part of most successful run plays is successfully 'setting the edges' of the play-gap by sealing defenders away from the hole. In a traditional counter-trey, it is usually achieved by the playside tackle sealing the defensive tackle to the inside, while the first pulling blocker seals the defense end to the outside. Because of the defensive alignment, however, the play-gap is sealed before a lead blocker ever gets to the gap. What you can see on the diagram is that, by essentially lining up the four DTs in the gaps, the Lions have made it very easy for the playside tackle, playside guard and center to downblock their respective DTs away from the play, with the backside tackle simply blocking his DT head-on in order to stop him getting any penetration in the backfield. The Lions likewise made an easy job for the two tight ends by lining the DEs up outside at a wide 9-tech alignment, meaning both tight ends are in great position to simply block their DEs towards the sideline. This make it easy for Walker to set the outside edge of the play-gap for the three lead blockers and Gore to get up to the second level. All these downblocks are marked by 'A' in Fig 2.

At 'B', you can see how the three lead blockers sealed off second-level defenders to enable Gore to score the touchdown. Because of the way the Lions are set up, there was no real chance that a third defender would attempt to get into the backfield by the strongside A or B gaps (where the RG is pulling to the left); ordinarily, the fullback will come into the hole vacated by the pulling lineman to take on any defenders coming into the backfield, but  the DTs are so pinched that it was unrealistic that any additional defender would be coming through. This frees up Tukuafu to instead act as an additional lead blocker to the two pulling blockers you would otherwise get in a counter-trey. Because of this, the play isn't truly a counter - Gore never takes a dummy step to the right - but there is likewise no need to wait for the two pulling blockers to come across, as Tukuafu is there to take the first man into the hole. The first defender into the hole is the linebacker Palmer; Tukuafu merely meets him head-on and blocks him to the outside. Because LT Staley has done such a good job down-blocking that it has opened a huge hole for Gore; of course, it likewise has opened the hole wide enough for the two inside backers, Levy and Tulloch, to come into the hole. Fortunately for Gore, the two lead blockers, LG Boone and H-back Kilgore, arrive in the hole just before Gore. Boone takes on Levy, giving him a hard pop that stops him in his tracks while Gore passes outside of them, while Kilgore cuts up inside Boone and engages Tulloch's inside shoulder, causing him to turn so that his back is to Gore and is therefore not in position to stop the running back. All that is left is for Gore to run into the endzone (which he does, crashing into Tukuafu as he does), extending San Francisco's then-slim 1-point lead by a touchdown en route to a 27-19 victory.

If you enjoyed this breakdown, remember that YOU can nominate a play you want to see broken down by tweeting a description of the play with the hashtag #TPL5plays, or by nominating it in our Facebook group. If we use a play that you nominated, you'll even get your name in the blog - and who wouldn't want that?