Five Plays that Paid Off - Week 2: How to Fake It Convincingly

With a few hours to go before Week 3 kicks off, it's high time for some breakdowns of the Five Plays that Paid Off for Week 2! Alas, I have been away from the TPL London branch (a.k.a. my house) for most of the week, and have only just been reunited with my trusty whiteboard, so without too much further ado, here's our first Play that Paid Off. 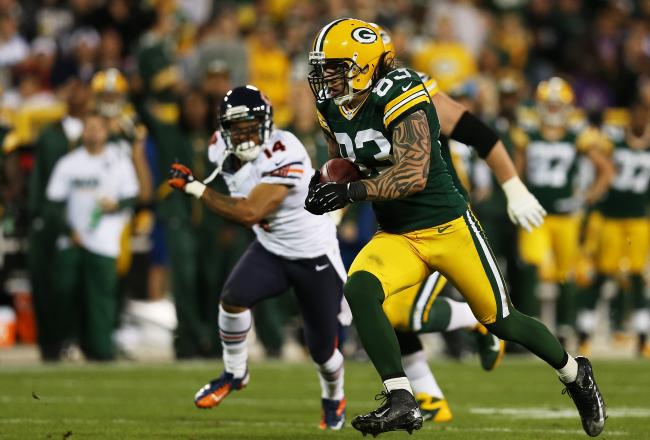 This play, some special teams trickery from last week's TNF, was nominated by Greg Roscow (@gregroscow) - nice one Greg! You too can nominate a play to be broken down by tweeting a description of the play you'd like to see analysed, with the hashtag #TPL5plays - if you are the first person to nominate a play we end up using, you'll get a mention in the blog just like Greg. Alternatively, you can nominate a play in our Facebook group. What, you mean you're not a member of our Facebook group yet? You're missing out! Make sure you join the group to take part in our regular polls, debates and arguments. Anyway, on with the play!

NB: As usual, the diagrams are only approximate guides to the action, and are not drawn to scale.


After the huddle/pre-snap: The Packers line up in a standard FG formation. Despite listing them at traditional base formation positions, the Bears actually line up as 8 defenders on the LOS, with the four 'DL' shifted towards their right, over the kicker, while the four DBs are lined up symmetrically, with the 'safeties' lined up shading the outside of the up-backs and the 'corners' lined up just outside the safeties. The three linebackers are standing right up against Peppers, Idonije and Melton. (Fig 1)

The thing in particular about this play is that as tricky as one might imagine a fake field goal to be, the play is actually very simply designed - something that no doubt helps it, as when trying a play in such unconventional circumstances, then the more simply the play is drawn up, the clearer each player's assignment is - and by extension, the more straightforward it should be for those players to execute their assignments.

The play's success is predicated on four key elements of the play, signified, as always, by letters. (Fig 2)

The play: The play itself is essentially a sweep with a pulling guard as a lead blocker - the only real difference being the ball carrier doesn't take a handoff from a QB. Crabtree, in at up-back, pivots and runs across the formation, receiving a shovel pass from Masthay as he sweeps (marked by the green dotted line). The most difficult part of the play's success is making sure that Masthay is able to make that shovel pass without being disrupted by the defense, as the play appears to be designed to go to Crabtree and Crabtree only, with no 'hot' read in case the defense came at him fast. We can see clearly how the Packers addressed this at point 'A'. Kicker Mason Crosby, after taking a dummy step towards the holder, immediately runs to the flat; this has the intended reaction - it causes Charles Tillman, who has come through unblocked due to Crabtree sweeping, to peel off and cover him, instead of continuing towards the backfield and hitting Masthay.

One interesting thing that stands out is that the Bears could have actually stopped this play, but put themselves out of position, specifically at the point marked 'B'. It may not seem clear from the diagram (my bad!) but what happens is that Melton, essentially lined up at LDE, shoots the A-gap between Sitton and long-snapper Goode, and LB Thomas attempts to follow him through the A-gap. By doing so, they have made the job of the the right side of the line much, much easier. Melton gets a little penetration into the A-gap, but all that does is allow Sitton to then seal Melton inside and away from the direction of the play; likewise, Thomas makes T.J. Lang's job easier by trying to follow Melton through the A-gap, by giving Lang a great angle to seal him inside. By sealing in these two defenders, Sitton and Lang have set one edge of the play gap for Crabtree.

The next key part of the play is, naturally, setting the other edge of the play-gap, which requires the Packers to seal to the outside the two defenders on the edge, Weems and Conte. Weems is easily dealt with - the playside up-back, Bryan Bulaga, simply waits for Weems to try and come around the outside to block the kick, as shown at 'C'. When Weems does so, Bulaga merely meets him head-on, puts his hands on him and simply drives him back towards the sideline until Crabtree is well past them.

The last part of the play occurs at point 'D', and concerns Conte. Unlike the other defenders along the LOS, Conte alone does not fire off the line, but rather drops back. Whether this is due to pure co-incidence, or whether he was the lone man charged with dropping back to watch the fake I cannot tell, but for some reason, Conte does drop back instead of charging forward. The player lined up at tight end, Dietrich-Smith (who up til now is most famous for being on the receiving end of this) goes up to block the safety, but due to Conte dropping back, Dietrich-Smith doesn't get a solid block on him, and while he initially pushes him back a little, Conte is able to begin to get off the blocker to the outside, where Crabtree is heading. As he does so, however, he find that Barclay, lead-blocking on a pull, is heading towards him. Barclay gets his hands on Conte, and, together with Dietrich-Smith, the two of them seal Conte towards the sideline, and sealing the outer edge of the play-gap. Crabtree cuts up inside these two linemen, and, accompanied by Lang - who, running down the field alongside Crabtree in order to keep Thomas at bay - crosses into the endzone for the first touchdown of the game.

Thanks again to Greg Roscow for nominating this play for one of the Five Plays that Paid Off. Remember, if there's a play from this week's slate of games that you want to see broken down, just tweet out a description of the play with the hashtag #TPL5plays - or nominate a play in our Facebook group - and you too could get your name in the blog!