Five Plays that Paid Off: Week 1 - The Torrey you Can Support 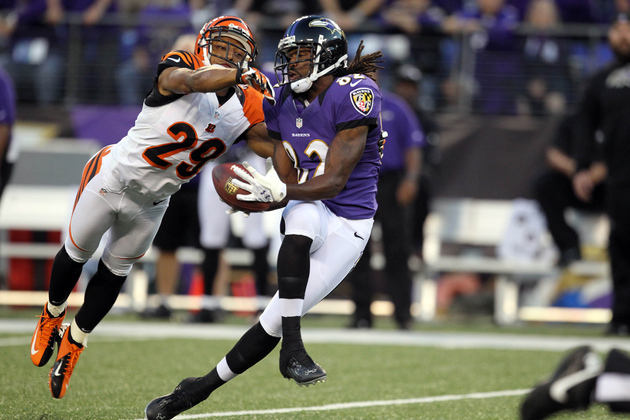 After breaking down three play-action passes we now... break down a play-action pass. This time, however, the play was nominated by our friends over at the v2journal/606v2 sports forum. We want our weekly Five Plays that Paid Off to be about you, the reader. So, make sure that if you see a play that particularly impresses you during TNF tonight, or any of the games on the weekend, tweet out the game & the description of the play you want broken down, using the hashtag "#TPL5plays" - the five best plays will get broken down next week, and if YOU were the first person to nominate a play that we use, you'll even get a shout-out in the blog!

In the mean time, hit the jump for our fourth Play that Paid Off, which, after the great Mike Carlson, we've named The Torrey you Can Support...


NB: As always, all diagrams are a rough guide and not drawn to scale

After the huddle/pre-snap: The Ravens line up with Ray Rice as the lone back, Flacco under center, Dennis Pitta at TE on the right of the line, and Anquan Boldin in the left slot. The Bengals line up in a their nickel package, with a CB coming on for an LB to cover the slot receiver. The coverage appears to be a Cover 1 shell, based on the way Nelson rotates to the middle of the field at the snap, with the other safety, Mays, appearing to play a soft middle zone underneath (once he recognises the play-action), marked in Fig 1 by green circles. The three corners in man coverage on the receivers, and Maualuga and Howard playing man coverage on Rice and Pitta respectively, all marked by green dotted lines in Fig 1.


The play: another play-action pass? Yes, we're breaking down another play-action pass. The play is relatively straight-forward, and though the play-action pass does draw in the two safeties (marked by letter 'A' in Fig 2) as well as the two linebackers, it wouldn't have made much difference for the pass to Smith. Mays, who, dropping back after recognising the play-action, does go to his soft middle zone, chooses to trail Jones on a crossing route; Nelson chooses to double up on Anquan Boldin running a soft sluggo (slant-and-go) route up the middle seam; this is perhaps unsurprising, as it leaves the team's best corner, Leon Hall, one-on-one with the Ravens' fastest receiver, Smith.

However, the play-action does assist the play in one key way - by freezing a defensive end who splits a poorly-executed doubleteam by RT Osemele and TE Pitta, as makred in Fig 2 with the letter 'B'.


As Joe Flacco gets the pass off (green dotted line) to Smith, he is hit by LDE Robert Geathers - but he's lucky that he was only hit as he threw, not sacked with the ball still in his hands. The two Ravens on the right of the line do a terrible, terrible job of blocking Geathers - and as Pitta stays at the line and never releases into a route, there's no justification, the two of them just failed - but Geathers does not head straight for Flacco. Instead, he pauses very slightly, turning towards Ray Rice who has faked receiving the handoff (at point 'B'), before recognising the fake and making a bee-line for Flacco. If the play was not off of play-action, but was a straight forward drop-back pass, the play ends in a sack.

The throw itself is a very nice throw, especially with Geathers bearing down on Flacco like a steam train. Smith is running a skinny post, with Hall allowing him to release inside, which implies he is expecting help from a safety over the top, presumably Nelson. However, Nelson has instead decided to double on Boldin, as explained above; as a result, there is no inside help for Hall, and all Flacco needs to do is throw inside Smith to complete the pass. Now, all that said, Hall does come close to making a play on the ball - he is a very good corner with very good instincts, and while he was never a risk to pick it off, it does look like he could have been in position to bat down the pass. Still, with no help over the top, it is unfair to put any blame on Hall. Likewise, it's not fair to put any blame on Nelson - he appears to be the lone deep safety with two receivers running downfield routes. It was very much a case of "pick your poison" - had Nelson gone to help cover Smith, then Boldin would have had wide open field on his inside. Ultimately, this play is a result of happy coincidence - the perfect offensive play to take advantage of the coverage the Bengals happened to play. The result? A 52-yard catch to start the Ravens' 2012 campaign in the most explosive of fashions.

Check back later for our last Play that Paid Off for Week 1 - the play that proves we don't just do play-action passes here at TPL! Remember, if you want to nominate a play to be broken down, in the same way that this play was nominated by the guys at v2journal, tweet out a description of the play you want broken down with the hashtag "#TPL5plays", and we'll break down the five best plays that are nominated by YOU!