Five Plays that Paid Off - Week 1: Punt Returners are People Too 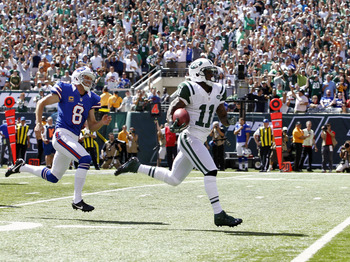 For our last Play that Paid Off of Week 1, we'll be looking at what is by far the most chaotic play in all of football - the punt. Twenty two men cover a huge length of the field, and use the entire width, during the course of the play. It is the least easy play to plan, due to the unpredictable nature of punts; long hours put into designing running lanes for returners, blocking schemes, counter-blocking schemes, coaching untold varieties of techniques to shed blockers, to split double teams, jamming gunners and gunning past jammers - all rendered utterly irrelevant by a punt landing even two or three yards in an unexpected direction. It is football at its most primal, the only time when players can be expected to go off-script and rely solely on their instincts.

Due to its complex and chaotic nature, this breakthrough may require a little more patience than the others, but it is necessary when breaking down the most interesting play in all of football - and we've got a doozy of a punt return to break down...

NB: As usual, and especially true for this play, the diagrams are NOT to scale and should be used as a rough guide only

After the huddle/pre-snap: The Bills line up in standard punt formation, with the personal protector on the punter's right. The Jets send the returner back deep, over load the left side of the field (with three of the five down linemen shifted to the left), linebacker Nick Bellore in the middle of the formation, and two jammers on the right side of the field, on Buffalo's left gunner. Pre-snap, Bellore shifts outside and sets up in the gap between the tackle, Dixon, and the left end, Magua. (Fig 1)


The punt: Now, punt returns are arguably the most chaotic of all play in American football, and when looking at Fig 2, you can see why that is true. It seems confusing, but bear with me and I'll try to explain what happens with every player on the punt, using points marked A - J. In order to make the squiggly lines a bit clearer, I've written the jersey number of each player at the end of the line showing their movement, so you should get an idea of what each player does during the punt. 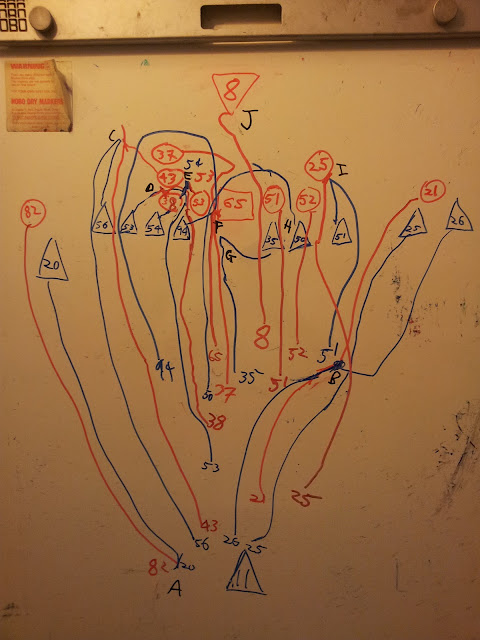 Let's start off with the simple stuff, points A and B

A: Incredibly straight forward - the gunner runs down the outside of the jammer, who keeps pace with him, towards the punt returner. The two actually trip up over each other, but both get back to their feet very quickly.

With me so far? Now, it gets a little more complicated - we look through points C-I, which deal with the various actions along the line, going from left to right on the diagram.

C: The punt blocker, #56 comes around the outside of the line, but the up-back, #43, peels back and cut blocks him. The punt blocker gets back to his feet and runs back down towards the returner down the hashmarks; the up-back who blocked him fires downfield inside of #56.

E: Here, the linebacker, #54, is attempting to get inside of the tackle and the guard, #53. The guard blocks him, but the linebacker decides to block back, forcing the guard to stay at the top of the field, away from the returner, until the catch is made.

H: The end, #50, is double teamed by the guard and tackle, #51 and #52. The end manages to split them, at which point they run straight downfield, and the end runs towards the punter, but once the ball is punted, loops to the inside and runs downfield.

Confusing? Yup, but hopefully it gives you a good idea of how chaotic punts actually are, as well as how the various players on either side attempt to block the punt, block the punt blockers, block the the blockers from tackling the returner, and on and on. The only other thing that happens on the play is the punt itself - 'J' - after which the punter runs downfield himself.

To clear things up, Fig 3 shows where the players stand as the punt is caught.


Now, as you saw above, punts really are a huge mess, so for simplicity's sake, you will find in Fig 4 only the actions of the significant players involved in the return, not the actions of every player. As always, the key points are indicated by letters.

The return: Kerley fields the punt and will go on to take it back 68 yards for a touchdown; but it requires four key blocks (confusingly labeled A-C), as well as over-keenness on the part of the Buffalo coverage unit, that allows it to happen.

The first key block is marked by 'A'. You may remember back in Fig 2, we saw this jammer, Lankaster, gave a bump to the same gunner, McKelvin, causing him to pause long enough for Lankaster to get ahead of him and run inside of him. Here, Lankaster hits McKelvin again, this time blocking him to the inside. It is a key block, which Kerley reads well; he runs over to his left, running outside of Lankaster's block and starting to build up a head of steam.

The next two blocks (well, a bump and a block) come courtesy of the same player, Trufaunt. As he is running down the field, he bumps the Bills' George Wilson towards the outside; Kerley is heading towards this sideline anyway, which draws Wilson, Bryan Scott and Corey McIntyre due to their overeagerness and overpursuit. However, Trufaunt's bump moves Wilson further over towards the sideline, which causes McIntyre to loop outside of Trufaunt - if he had stayed inside him, then he should have been in position to stop Kerley. Instead, he loops outside and leaves a seam open between Wilson and the longsnapper, Sanborn. Kerley uses his quick turn of speed to cut inside of this seam; Wilson is caught off guard, has his balance shifted the wrong way, and is unable to change direction quick enough to catch Kerley, dealing with the player on one side of the seam. The other side of the seam, Sanborn, is unable to get to Kerley as a result of a block from Trufaunt, who, after bumping Wilson, runs inside to block the long snapper. Trufaunt was therefore responsible for setting up both sides of the seam which Kerley hit to really break open the play - so, Jeremy Kerley, if you're reading this, you better be picking up Trufaunt's bar tab for the rest of the season.

Truth be told, at this point Kerley could probably have made the return the rest of the way on his own; still, there were two players who theoretically were in position to make a play on the returner, Nigel Bradham and punter Brian Moorman. Bradham attempts to get an angle on Kersley to track him down, but Marcus Dixon sees him coming and makes a block on him, marked by 'C'; while realistically Bradham doesn't have the speed to catch Kerley down, nonetheless, Dixon's block ensures there is no chance that he stops the play hitting home.

Lastly, Kerley takes advantage of the keenness of Moorman. Kerley already took advantage of the Bills' overeagerness back at point B; it's a similar case here. Moorman runs over to the sidelines in the hope of cutting off Kerley. As a result, when Kerley hits the seam between Wilson & Sanborn and heads for the far pylon, Moorman is way out of position, and can only stare helplessly as Kerley runs away from him at a greater pace than Moorman is capable of as he crosses into the endzone for a touchdown.

We hope you've enjoyed the first week of our Five Plays that Paid Off; remember, if you see a play on Sunday or Monday that you want to see broken down, tweet out a description of the play with the hashtag "#TPL5plays", and if we use your play, you will even get your name in the blog!

As always, we love getting feedback, so feel free to drop any suggestions on ways to improve the series in the comments below, by tweeting the blog (@PullingLinemen) or myself, or by telling us in our facebook group.