Five Plays that Paid Off: Week 1 - More Tight Ends than You Can Shake a DB At 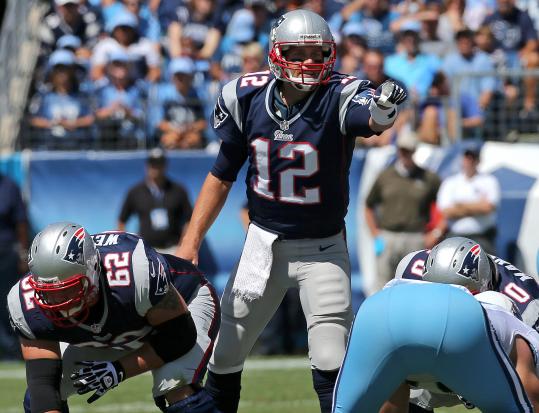 For our third Play that Paid Off, we've decided to choose a play that is much more straightforward than the previous two. It again feature our old buddy, play-action, with a pulling lineman thrown in too for good measure; but it demonstrates that sometimes, all you need is a quarterback and a receiving threat who can diagnose coverage and find the weaknesses. The play also illustrates some of the ways how defenses try and fool quarterbacks by using exotic coverages - though they may have had more success against a quarterback who isn't quite as great as Tom Brady is...

Reminder: we want YOU to nominate the plays for next week. When you're watching TNF tonight, or any of the games this weekend, if you see a play you want broken down, tweet out a basic description of the play with the hashtag "#TPL5plays" - if we choose your play, you'll even get a shoutout in the blog! What more could you ask for?

NB: As always, the diagrams are only intended to be an approximate guide to the video linked below. They are NOT drawn to scale.

After the huddle: The Patriots line up in a three-tight end formation, with Hernandez lined up as a true tight end on the left of the O-line, Hoomanawanui lined up as an H-back outside of him, and Gronkowski lined up as an H-back outside of Hoomanawanui; Brady lines up under center, with Bolden as the single back and Lloyd as the lone receiver, to the right. The Titans line up in one of their nickel packages, substituting a linebacker for a third safety. Starting strong safety Babineaux comes down into the slot and lines up over Gronkowski, Michael Griffin moves from his more natural free safety spot to the traditional strong safety role, creeping into the box, while Robert Johnson subs in as the free safety, playing high and deep. (Fig 1)


Pre-snap: Gronkowski motions across the formation and sets up at H-back, left. The LDE, Solomon, widens to line up on his outside shoulder, Wimbley shifts slightly to be head-up on Hernandez, while Babineaux shifts inside to line up across Hoomanawanui. The teams are now lined up as in Fig 2.


The play: this play is a drop-back pass off of play-action (we wanted to mix it up to our previous two Plays that Paid Off). This play, however, does feature some rather exotic coverage from the Titans D - albeit coverage that failed. The defense initially doesn't do anything special, as it looks like a run; once it's clear that it is a pass, though, you begin to see some more unusual coverage. As you can see in Fig 2, at the snap the Titans actually have five men on the line of scrimmage, the four down linemen + Babineaux. The two men on the end - Babineaux and DE Solomon - initially give the two TEs they are lined up on a bump, but then appear to drop back in zone coverage, with each of them covering the shallow zone on their half of the field. The other DE, Wimbley, initially seems to be covering Hernandez in man coverage, but then peels off to cover the middle of the field, again apparently in zone. Once Wimbley tails off, Griffin takes over, running with Hernandez in man coverage the rest of the way; likewise, Ayers appears to be in man coverage on Gronkowski the whole way. On the outside, McCourty plays off Lloyd, but when Lloyd runs a curl route, McCourty rushes down to cover him tight. Up top, CB Verner appears to be falling back to cover a deep zone, which suggests he is covering the right half of the field in Cover 2. The Titans only send three players to rush the quarterback, the two DTs and McCarthy. The coverage can be seen in Fig 3, with the five zones represented by green circles.


The play itself is relatively straightforward, and didn't rely too much on drawing players away from coverage as Griffin's TD did (with one exception, marked at 'B'), or require well-executed blocks like Manning's screen pass to Thomas did; rather, it came down to a very talented tight end finding a soft spot in zone coverage, a quarterback who, unsurprising to anyone, showed quick and excellent decision making, speeding through his reads until he found the open man.

There are two points to draw attention to, marked, as always, by letters of the alphabet. 'A' marks out the play-action, which fools eventual rusher McCarthy, delaying his blitz for a few seconds and allowing center Wendell to peel off a doubleteam with Connolly on Martin, and pick up the blitzing McCarthy. One of the reasons why McCarthy is fooled is an element we've not seen in the other two plays broken down - rather than just faking the handoff, the play also sees left guard Logan Mankins pulling across the formation as if he was lead-blocking for Bolden. It's a bit of a gamble - it leaves a large hole that McCarthy could have blitzed through straight away, and at that point, Wendell would not have been able to pick up the blitz. However, the gamble worked, McCarthy bit on the play-fake (as shown on the board), and so delayed himself long enough for Wendell to be in position to block him, thus allowing Brady to get the pass off.

As said above, there isn't too much more to this particular play, except for what you see at 'B'. The green circle shows what was Robert Johnson's zone; but the red line shows where he actually went on the play. As you can see, he initially walks over to the middle of the field, where he would have been in position to make a play on Hernandez; however, he is instead drawn to the sideline by Gronkowski running a 'go' route. By moving over to Gronkowski, Hernandez is now is fully open to release inside of Griffin, as the corner Verner is staying over towards the other sideline in order to stop Hoomanawanui should he have caught a the pass. All that's left is for Brady to make sure he throws in front of Hernandez, which of course he does easily, and the TE catches the ball just before the goal line and crosses into the endzone for a straightforward TD. Simple as you like.

That's three plays so far, all of them being touchdown passes off of play-action; for our next play, we'll be breaking down... another play-action pass, but hey, at least this one isn't a touchdown! It will, however, be the first play of the game for a QB who claims to be the best in the game right now - check back later to see which it is. Oh, and in case you think all we do here is play-action passes, don't worry - the fifth and final Play that Paid Off will prove that special teams has a place in our hearts too...