Can we call him a bust yet? 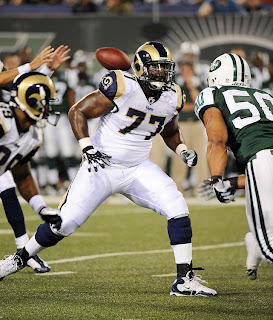 I think we probably have to.

Former #2 overall pick, OT Jason Smith has been traded from St Louis to the New York Jets for an as yet unconfirmed deal which is known to include Jets OT Wayne Hunter going the other way. The fact is, the way Smith has been performing this preseason, and looking back over his 3 seasons in St Louis, it's likely just a straight swap, which does not leave him with a glowing reference.

Since being selected with the 2nd overall pick in the 2009 draft, Smith's career with the Rams has been filled with injuries and turmoil. He occasionally started at LT his first year, where you'd expect an OL picked that high to play, but mostly he was set at RT until he suffered a serious concussion in November, which forced him to miss the remainder of the season. By 2010, Rodger Saffold had beaten him in competition for the LT spot, and Smith was cemented as RT - where he started 15 games for the 7-9 Rams, undoubtedly his best year in the league. Last year, however, he entered the season fighting for his job, knowing his rookie contract was almost up, and he needed to impress to stay on the roster. 8 mediocre performances followed by another serious concussion trying to make a tackle following an interception and he was done for the year; and, as it turns out, for his Rams career.

The deal struck between the Rams and Jets is a curious one to say the least. Neither Smith nor Wayne Hunter were starters at their former clubs: Smith losing the camp battle at RT to Barry Richardson, and Hunter being recently replaced by Austin Howard. The Jets had already tried to bring in RT cover, striking a deal for Panthers' Jeff Otah which fell through when the Carolina OT failed his physical in NY. It simply appears these two teams are clutching at straws for something, anything, that might help out their OL units. 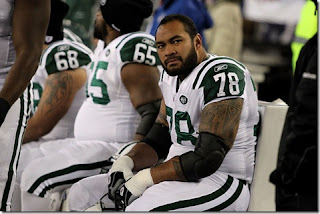 For the Rams, Hunter might compete with Barry Richardson, and Brian Schottenheimer knows him from their time together in New York, but with only a few days to go before the final cut to 53, if he doesn't immediately impress he might be let go in favour of retaining a rookie with a chance to grow into the position. His one upside is utility - much like Adam Goldberg he is a useful guy to have on your bench as he can fill it at either tackle position, or at TE, and even kick inside at a push.

For the Jets, Smith probably has a good chance to start. The OL in NY has some excellent pieces, Nick Mangold and D'Brickashaw Ferguson instantly spring to mind, but there is a massive hole at RT; and with the offense falling flat on its arse in preseason, the team will hope any change will be a good change.

- Phil Gaskin (@sosayitisaid)
- The Pulling Linemen
Posted by Writers at 08:08