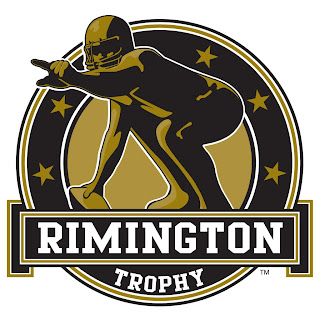 We're just a few weeks away from the start of the college football season, and it's about time we started getting excited. For fans that don't follow college football closely, it can be difficult to really get into a team and get to know the players, particularly if you don't have a personal link to a team or school. It's even harder to get to know the most important people on that team - the O-linemen. The big name QBs, LBs, and to some extent LTs will get plenty of fan focus, but Centres often fall under the radar (Ed: Yes, we'll be using the British spelling of Centre throughout the series!); and so over the coming weeks we'll be bringing you some Rimington Watch List profiles to help you get to know the guys at the centre of the football world!
What is the Rimington Watch List? Well, The Rimington Trophy is presented annually to the Most Outstanding Centre in NCAA Division I-A College Football. Each Summer, before the season begins, the Trophy committee releases it's list of Watch List candidates - the players it believes have a chance to earn the crown at the end of the season. This years list contains 51 names, and starting today we will be profiling them all, as well as giving you some quickfire Q&As with the candidates! Let's get into it.
Trent Dupy 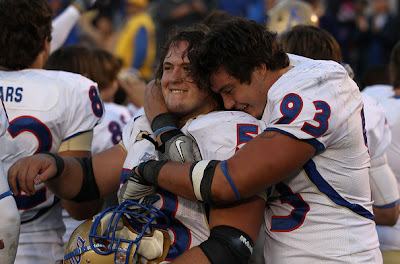 Name: Trent Dupy
School: University of Tulsa
#53
Height: 6'2
Weight: 285
Year: Senior
Nickname: Dupy
HS Attended: Enid High School
Football Hero: Jeff Saturday
Non-football Hero: Dad
Favourite Movie: Forrest Gump
Favourite Band/Artist: Alan Jackson
Favourite Pro-Sports Team: Dallas Cowboys
Aim for 2012: Win conference championship and win a bowl game to finish my college career
Bio: We kick off our Rimington series with Trent for purely selfish reasons. Since almost day 1 of The Pulling Linemen, Trent has been a follower and a fan, and helped us out plenty on twitter. Dupy started his football career in Enid, OK, playing both Centre and Defensive Tackle for the Plainsmen. He earned plenty of interest from schools in his home state, with Oklahoma, Okie State and Tulsa all courting him, and he also received an offer from Iowa St. Eventually, it was the chance of immediate playing time that attracted Trent to Tulsa, and he verbally committed in August 2008. His choice has been a wise one, as over his 3 years in Tulsa he has played in all 38 of Tulsa's games, starting 36 of them at C, and consistently grading exceedingly high - including 90% against the national #1 Oklahoma in 2011, and a career high 92% on 62 snaps vs Tulane the same year. This is Trent's second straight year on the Rimington Watch List.
Mario Benavides 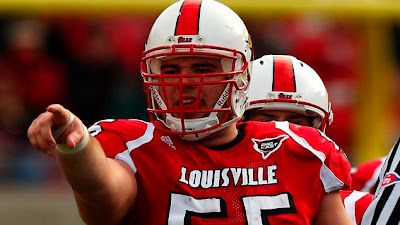 Name: Mario Benavides
School: University of Louisville
#55
Height: 6'4
Weight: 301
Year: RS Senior
Nickname: "Mijo"
HS Attended: Los Fresnos High School
Football Hero: Jeff Saturday
Non-football Hero: My Father
Best player you've played with/against: Played with - Eric Wood, Louisville; Played against - Mick Williams, Pittsburgh
Pregame Ritual: Listen to calming music
Favourite Movie: The Departed
Favourite Artist/Band: Lynyrd Skynyrd
Favourite Pro-Sports Team: Dallas Cowboys
Aim for 2012: Win the Big East Outright and be awarded 1st team All Big-East
Bio: Next we have Texan, Mario Benavides, now plying his trade in Louisville, Kentucky. Coming out of Los Fresnos, Texas, Benavides impressed on the outside of the O-Line, dominating at Tackle for the Los Fresnos HS Falcons and pancaking 200 (yes, that's TWO HUNDRED) defenders in his 3 seasons there. He initially commited to Ole Miss, but following a change of heart decided Louisville was a better destination for him, and he enrolled in January to get straight into Spring practice. Despite playing OT in school, and being graded as an OG for college, Mario started game one of 2009 as a RS Freshman at C and started all 12 games. He has established himself as a permanent fixture on the Cardinal OL, missing only 4 games in his 3 years so far due to injury, and consistently playing through other knocks to help his team. He has been honoured by the team in 2012, as he appears on the season-tickets for the Louisville-Tulane game.
Reese Dismukes 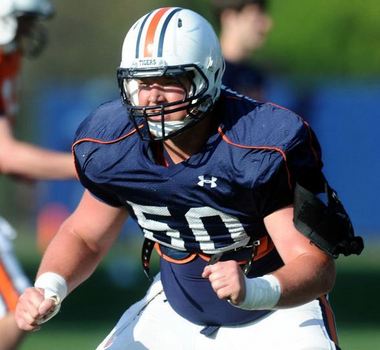 Bio: Unlike the first two of our Watch List profilees, Reese Dismukes has been firmly at C since his early HS days. Alabama born and bred, Dismukes earned his starting role at Spanish Fort HS as a sophomore, and instantly impressed, not allowing a single sack throughout his sophomore or junior seasons. He also showed great leadership - named as a captain for both his junior and senior years. His play was outstanding, and as a senior he was ranked as the #1 Centre in the nation by ESPN and 247Sports, and in the top 5 Centres by Scout.com and Rivals.com. He was, naturally, very highly recruited, receiving offers from Florida St, Ole Miss, Georgia Tech, Stanford, Alabama, and the college that he ended up commiting to, Auburn. In his freshman year, 2011, Dismukes started all 13 games making him the first true freshman to start at Auburn since 2007, and earned him a place on the SEC Coaches' All-Freshman Team and vote as CBS Sports Freshman All-American. Now in his sophomore year, Dismukes will hope to build on an excellent start to his college career, and continue to cement himself as one of the best Centres in the nation.
Mike Marboe 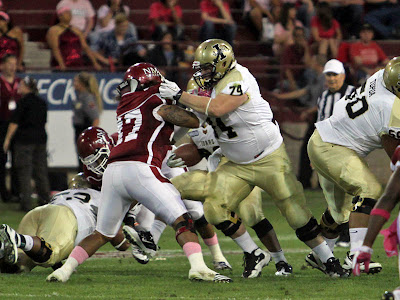 Name: Mike Marboe
School: University of Idaho
#: 74
Height: 6'2"
Weight: 300
Year: R. Soph.
Nickname: Marboner
Major: Double major Marketing & Finance, minor statistics
HS Attended: Wenatchee High School
Football Hero: Jeff Saturday
Non-football Hero: Michael Jordan
Best player you've played with/against: Matt Cleveland, Sam Tupua, Tyrone Novikoff. Last years O-line seniors for UI.
Pregame Ritual: Country Music
Favourite Movie: Man on Fire
Favourite Artist/Band: No specific, anything country
Favourite Pro Sports Team: Seattle Seahawks
Aim for 2012: Bowl Victory
Bio: It's no surprise to hear the name "Marboe" in connection to Idaho. Mike's father, Scott Marboe, was a linebacker for the Vandals in the 70s, and his grandfather Kent Marboe Sr. played in the 50s. Mike also has a cousin, Brad Marboe, on the current roster, so it's fair to say the bloodlines run deep at the Kibbie Dome. Mike had a stellar HS career at Wenatchee, WA, where he earned First Team AP All-State selection, and was ranked as the 25th prospect in the entire Northwest region. Marboe also excelled in class with a 3.9 GPA allowing his to graduate from HS a semester early, so it's no surprise to hear he is double majoring. He redshirted his first year with the Vandals in 2010, but emerged as a leader in 2011, starting all 12 games and according to the players and coaches around him, pushing everyone hard to get better. Marboe will undoubtedly continue to grow as part of the offense, and don't be surprised to hear him named captain before long.
Matt Smith 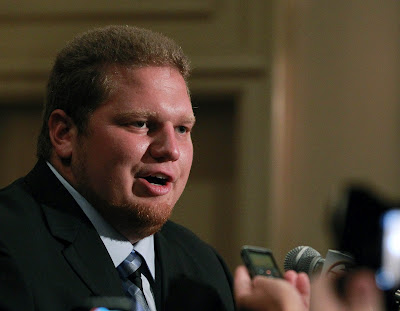 Name: Matt Smith
School: University of Kentucky
#69
Height: 6-4
Weight: 296
Nickname: Schmitty
Major: Community and Leadership Development
HS Attended: St. Xavier
Football Hero: Dermontti Dawson
Non-football Hero: My Father
Best player you've played with/against: With- Randall Cobb, Against- Nick Fairley
Pregame Ritual: Listen to "Till I Collapse" by Eminem on the bus ride to the stadium
Favorite Movie: Talladega Nights: the Ballad of Ricky Bobby
Favorite Artist/Band: Eminem
Favorite Pro Sports Team: Philadelphia Eagles
Aim for 2012: Get back to a bigger and better bowl game
Bio: Matt Smith played very little Centre in his HS career. St Xavier, the perennial powerhouse of HS football in Louisville, KY, used him mostly on the defensive line, and occasionally as a TE, but despite this he was still ranked as the 63rd best OG in the nation by Scout.com before committing. His talents drew interest from a number of quarters, including Michigan, Boston College and Ohio (who made him an offer), but it was UK who got the commitment from Smith. After redshirting in 2008, he made his debut in the Wildcats 09 season opener vs Miami and went on to play in 6 games. He earned the starting role in 2010 by winning an open contest in camp for the position, and went on to start all 13 games. An ankle injury slowed him in 2011, allowing him to only start 9 games, but is looking to bounce back in 2012 with his second naming to the Watch List in his senior year.

That's it for this first look at the Rimington Watch List candidates, but keep an eye out for the next installment where we'll be bringing you more Q&As and Bios, including Centres from the SEC, Sun Belt and C-USA conferences.

- Phil Gaskin (@sosayitisaid)
- The Pulling Linemen
Posted by Writers at 15:33