In this, the fourth installment of our TPL100, we find a few positional firsts. Our first tight end, our first two QBs, and our first 2011 rookie! At #66 you'll also find probably our most controversial selection...

Remember, we'll be running a TPL Mailbag session at the end of of Top 100, so please send us your opinions on our picks. Don't like where we've ranked someone, or think we've missed someone out completely, comment below, tweet as @PullingLinemen or find us on Facebook. 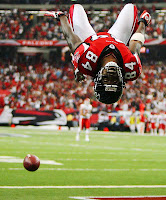 Roddy white has really emerged as a record breaking WR over the past 4 years in the NFL. Joining the Falcons in 2005, he has taken the field in every single one of their regular season games since, emerging as a full time starter in 2007. Since 2008, he has been named to 4 consecutive Pro Bowls, as well as voted All-Pro in 2010, the year in which he not only broke the Falcons NFL single season receiving record with 1389yds, but also led the entire NFC in yards, and the NFL in catches (115). White’s skills have been well utilised since the arrival of Matt Ryan at QB, and despite the fact he lacks the top gear to make the fastest corners worried about balls over the top, he has excellent hands, and can make impressive catches in traffic, thanks in no small part to his solid 6’0 211lb frame. With Julio Jones providing the home run potential on the other side of the field, the Falcons have a formidable receiving duo, and with opposing defences split on who to cover as more dangerous, White may find himself in single coverage often – making him critically dangerous for 2012.
#69 - Lance Briggs, LB, CHI [TD = 70, PG = 53, GS = 98]

Lance Briggs is sometimes the forgotten linebacker in Chicago. Because of the presence of the more media-centric Brian Urlacher, Briggs’ name is sometimes an afterthought, but his value to the Bears is massive. Arriving in 2003 out of Arizona, Briggs has been named to 7 consecutive Pro-Bowls since 2005, as well as 3 All-Pro teams, and was an integral part of the Bears D that carried Rex Grossman and co all the way to the Superbowl in 2006, only to come unstuck at the hands of Peyton Manning’s Colts. Briggs is fast approaching the 1000 tackle landmark, almost certain to break in early in 2012, having removed his trade request to the Bears after they re-signed him with a lucrative 1 year contract extension through 2014. A fully fit Bears team has the ability to be one of the best in the NFC, a fact which Briggs agrees with, declaring them “championship calibre”. It’s time for them to put their money where their mouth is, and Briggs will be relied on heavily to cash the cheques his mouth is writing.
#68 - Von Miller, LB, DEN [TD = --, PG = 81, GS = 37]
His rookie season was a sensation, and he is infinitely more to thank for the Broncos run in the playoffs than Tebow was (just as a quick spoiler, Tebow will NOT be on our top 100 list, having not been ranked in the top 100 by any of our writers). Selected with the second overall pick in 2011 by the Broncos, the former Texas A&M star, Miller started making an impact for the Broncos from his very first play from scrimmage – forcing the Raiders Jacoby Ford to fumble. After this lightning start, Miller was also named AFC Defensive Player of the Week for his performance against the Jets, and selected to the Pro Bowl at the end of the season having recorded 64 tackles and 11.5 sacks. He earned AP Defensive Rookie of the Year, and with Peyton Manning now in Denver, will have a legitimate offence to work opposite, helping him to improve as a player and also making it more likely the Broncos D won’t have to play lights out every week just to carry Tim Tebow into the 4th quarter.
#67 - Matt Schaub, QB, HOU [TD = --, PG = 85, GS = 33]
At last our top 100 team has a QB! The injury to Matt Schaub in 2011 was probably the difference between the Texans making it to the Superbowl and their eventual playoff defeat at the hands of the Ravens. It may have taken him a few years to establish himself as a top tier QB in the NFL, but ever since joining the Texans in 2007 he has shown himself to be a franchise calibre player. 98 TDs to 58 INTs in his career are decent numbers, and thanks to playing behind an excellent offensive line the past few years, Schaub has been able to continue to build on an impressive career. ’09 was his highpoint, finishing as the NFL  passing yards leader, being selected to the Pro Bowl, and winning Pro Bowl MVP. Although Big Fat Albert Haynesworth managed to break Schaub’s foot in week 10 of the 2011 season, forcing him onto IR, Schaub is ready to return fully fit in 2012, and is a very decent bet to lead the Texans to the AFC South title, and potentially the AFC Championship too.
#66 - Peyton Manning, QB, DEN [TD = 23, PG = 91, GS = --]

Yes, Peyton Manning is at 66. There are plenty of reasons for it, and they’re mostly based on how we see Peyton performing in 2012. Obviously if this list was based on previous achievements and playing ability, Peyton would warrant top 10 consideration at the very least, likely top 3. But it’s not; this list is who we would want to have playing for us tomorrow. Quite simply, there are a lot of QBs I would rather have than Peyton under centre, and his situation in Denver demonstrates my reasons for this. Without an absolutely unbeatable offensive line, I worry about Peyton taking hits. Aside from Ryan Clady, I don’t trust the Broncos OL to keep Peyton upright and coming back from neck surgery, this spells trouble to me. Aside from a good OL, the best thing to protect a QB is a solid running game. Denver doesn’t have this either. Don’t get us wrong, Peyton is still an excellent QB, who will likely perform really well for the Broncos (he wouldn’t have come back if he knew he couldn’t), but he’s just not the elite QB he was before his injury.
#65 - Andrew Whitworth, T, CIN [TD = 65, PG = --, GS = 46]
At offensive tackle, Andrew Whitworth was a key part of the Bengals journey back to the playoffs in 2011, and was very close to being a consensus pick in the TPL100 this year (PG had him ranked in the 101-105 range). He started his NFL career inside at Guard, playing 3 years there for the Bengals, before Marvin Lewis decided to kick him out to tackle to protect for Carson Palmer. He hasn’t missed a start since, playing 16 games in each of ’09, ’10 and ’11, as well as their 2011 playoff defeat to Houston. Whitworth is a veteran and a leader on the Bengals team, and with his great size (6’7, 335lbs), strength, and ability to work angles, he will be vital in the continued development of this offence for the next couple of years.
#64 - Mike Wallace, WR, PIT [TD = 60, PG = --, GS = 45] 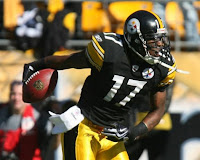 The real value of Mike Wallace in the NFL was truly tested this off-season. He became a restricted free-agent, having signed his rookie contract with the Steelers in 2009. The Steelers tendered him at a 1st round grade, meaning any team in the NFL could sign him up, but would need to give Pittsburgh their 1st pick in 2012 in compensation. The asking price may not have been too high for a top tier WR, but Wallace’s contract demands may have put a lot of teams off, and he failed to receive an offer from elsewhere before the draft. He still hasn’t signed his tender with the Steelers, nor have they offered him the long-term contract he wants, and so a holdout could well be on the cards. His talent is unquestionable, with blistering pace and solid hands, he’s recorded 171 receptions for 3206 yards and 24 TDs in his 3 year career, emerging as Pittsburgh’s #1 receiver. But whether he’s proved himself worthy of the Larry Fitzgerald-level money that he wants is doubtful, or at least the Steelers think so.
#63 - Greg Jennings, WR, GB [TD = 66, PG = 77, GS = 56] 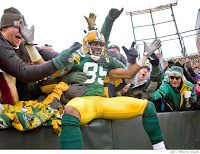 The third WR in today’s selection is Greg Jennings, Superbowl winner with the Packers in 2010. Jennings has been blessed by playing with truly elite QBs for his entire career in the NFL, initially with Brett Favre, and more recently Aaron Rodgers. In 88 regular season games for the Pack he’s recorded 6,171 yards, and caught 49 TDs. In their Superbowl winning year, Jennings put up his most impressive numbers, with 12 regular season touchdowns, and 2 in the big game itself, helping Green Bay to their 31-25 win over the Steelers. 2010 was also the first year Jennings was voted to the Pro Bowl, a feat he repeated in 2011. With the emergence of Jordy Nelson, also present on our top 100 list, Jennings’ importance to the GB offence may be expected to diminish in 2012. The coming season will really test Jenning’s mettle, and if he is really worthy of his #63 billing he will force Rodgers to look for him consistently, rather than loose him in the Packers over-stocked receiving corp.
#62 - Jason Witten, TE, DAL [TD = 91, PG = 38, GS = 70] 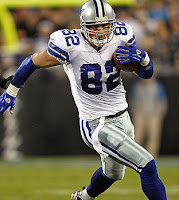 Witten is considered by many to be a borderline Hall of Fame tight end when his career is over, and is the first TE we come across in the TPL100. His 9 years in the NFL have all been spent in Dallas, where since his sophomore season he has been a perennial Pro Bowler, being voted in 7 times, and missing out for only the first time since his rookie year in 2011. He’s also earned 5 All-Pro nominations, and 3 awards of Tight End of the Year on his way to the 3rd most receptions in NFL history by a tight end, pushing Ozzie Newsome down into 4th in November 2011. Witten hasn’t missed a start in 5 years, and despite the arrival of Miles Austin and Dez Bryant, has continued to earn his share of targets in the Cowboys offence. Whilst Tony Gonzalez’s records may be unsurpassable, Witten will undoubtedly go down as an NFL great, whether or not he eventually earns a HoF bust.
#61 - Nnamdi Asomugha, CB, PHI [TD = 27, PG = 66, GS = --] 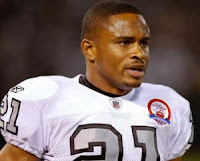 Nnamdi Asomugha has been the definition of a shut-down corner, really since his 2007 season in Oakland. In 2006 he made 8 interceptions, returning 1 for a 24yd TD, as well as defending a further 11 passes. Ever since, QBs have known not to throw to his side of the field, which despite hurting his statistics, was vitally important in Oaklands D. The one criticism of Nnamdi was that he could only play at right CB due to his technique, which often matched him up against #2 receivers, rather than a team’s main threat. This didn’t deter the Eagles, who signed him to a 5 year, $60million contract before the 2011 season. He managed 3 interceptions in his first year in Philly, and alongside Dominique Rodgers-Cromartie currently forms part of perhaps the most formidable CB duo in the league. Nnamdi’s skills aren’t only limited to the field, as he also had a cameo part in everyone’s favourite football-based TV drama, Friday Night Lights. Remember that cop who brought Vince Howard to training that day? Yeah, that was Nnamdi.
Don't forget to check back tomorrow for our next installment. Our #60-#51 is the way all NFL rankings should be, Lineman heavy!
- Phil Gaskin (@sosayitisaid)
- The Pulling Linemen
Posted by Writers at 20:48