Finally, the list that literally some of you might have been waiting for! The NFL Top 100, as voted for by the NFL players, has come in for a lot of criticism from fans, players and pundits alike. One of the biggest points of contention is exactly what the players were voting on: the best players in 2011? The order in which players should be taken in a complete re-do draft? How valuable they are to their franchise? For us, the brief was simple, the season starts tomorrow; who do you want on your team? We chose not to exclude players who are currently injured, unless we feel like their injury may significantly affect their level of play upon their return. Based on that one question, we have compiled our TPL100 Ranking for 2012. We'll be releasing our selections over the next 10 days, so keep checking in and follow us on twitter (@PullingLinemen) for news of new posts! 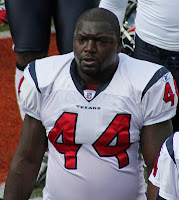 So we kick the TPL100 rankings off with a full-back! At least he’s widely considered the best FB in the league. It took him a while to make a name for himself in the NFL, having played for the Packers for 3 years and the Texans for a further 4 years before playing a massive part in Arian Foster’s 2010 breakout campaign. When Leach was voted into the NFL Top 100 last year there were a number of eyebrows raised,  and the comment of “Now he’s a Raven, if Ray Rice has a huge year then we can start giving Leach credit” was bandied about. In Leach’s first year in Baltimore, Ray Rice ran for 12 TDs – the same number he scored in his first 3 seasons combined. Enough said.
#99 - Evan Mathis, G, PHI [TD = --, PG = --, GS = 59] 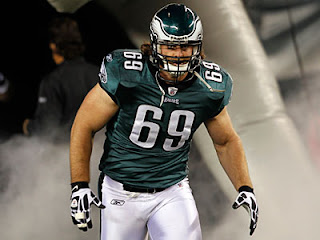 For Evan Mathis to have made in into the TPL100, he must’ve had a fantastic 2011. In his previous 6 years in the NFL he’d only started 22 games, and 15 of those were back in 2006. It seems his move to Philadelphia has done him wonders though, as 15 starts for the Eagles combined with some stellar performances have earned him glowing reviews. Guard is a hard position to shine at, at any level, but Mathis consistently excelled in both run and pass blocking from his LG position, and played a big part in LeSean McCoy’s 17 touchdown season. The Eagles obviously believe, signing the 30 year old to a five-year, $25million contract in March.
#98 - Victor Cruz, WR, NYG [TD = 76, PG = --, GS = 84] 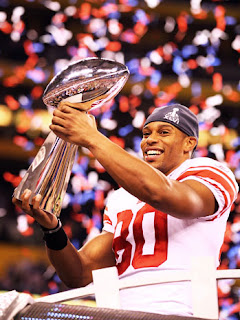 Victor Cruz sneaks into our top 100 thanks to an excellent sophomore season. He didn’t take the field much as a rookie, but burst onto the scene for Big Blue against the Eagles in week 3 of 2011 with two touchdowns, including a 74 yarder. He finished 2011 with 7 games of 100 receiving yards or more, and 9TDs. Although he was kept relatively quiet in the Wild Card and Divisional playoff rounds, he returned with 10 catches for 142 yards against the 49ers in the NFC Championship game, and scored a first-quarter TD in Superbowl XLVI that eventually led to the Giants winning the title for the second time in 4 years. With Hakeem Nicks hobbled, Cruz may have to been leaned on for the start of 2012, when he’ll really show his value.
#97 - LaMarr Woodley, LB, PIT [TD = 92, PG = --, GS = 68] 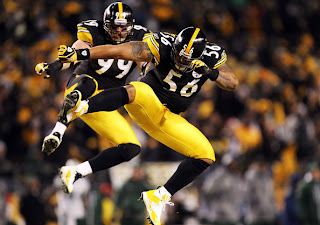 In his 5 year career, LaMarr Woodley has pretty much done it all. The University of Michigan, multiple award winning (Lombardi Award, Ted Hendricks Award, Big Ten Defensive Player of the Year) outside linebacker was drafted 46th overall by the Steelers in 2007, hoping to become the latest in a very long and distinguished line of LBs who’ve graced the Pittsburgh turf. It didn’t take him long to start staking his claim. 4 sacks in 13 games in his rookie year and an impressive performance in camp before his sophomore year earned him a starting spot on the Steelers dominant D, and in his first career start, week 1 versus the Texans, he recorded 3 tackles, 1 sack, 1 interception and 1 fumble recovery – earning him a Defensive Player of the Week award. 2008 continued very well for Woodley, who finished with 11.5 sacks in the regular season, and in Superbowl XLIII he sacked Kurt Warner with 5 seconds remaining to seal the victory for the Steelers. He has since gone on to total 48 sacks, and despite missing 6 games in 2011, remains one of the most productive members of the Steelers D, and with age on his side (unlike OLB partner James Harrison), he is sure to be a massive part of the future in Pittsburgh. 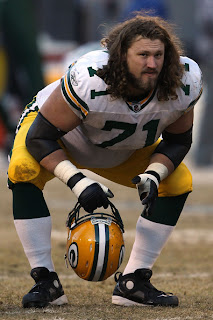 A second offensive guard makes it into the 90s on our list, with the Packers’ Josh Sitton at 96. The 4 year veteran has started 48 games in his career in Green Bay, and was an integral part of the line that protected Aaron Rodgers all the way to Superbowl XLV in 2010. It was his role in the Packers journey to the title that earned Sitton the vote as Offensive Lineman of the Year by NFL Alumni, as well as a Pro Bowl selection as an alternate. Sitton is also a very durable lineman, leading the Packers in number of offensive snaps in 2009, and missing only 2 games in his 3 years as a starter. The Packers OL will take a bit hit this year, with veteran LT Chad Clifton’s back surgery forcing the team to release him. It will be up to Sitton, Brian Bulaga and co to help fill the big void left both on the field and in the dressing room.
#95 - Jordan Gross, T, CAR [TD = 79, PG = 100, GS = 79] 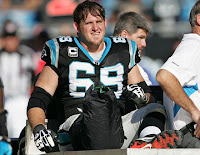 Our first offensive tackle comes in at 95, 9 year veteran Jordan Gross, who is the first consensus TPL100 selection, having been ranked by all 3 of our writers. Gross has played his entire NFL career in Carolina, since his selection with the 8th overall pick in 2003, and as a rookie played at right tackle for every single snap of the Panthers run into the post-season and eventual loss in Superbowl XXXVIII – earning him All-Rookie and All-Pro awards from ProFootballWeekly and Sports Illustrated, respectively. He didn’t miss a game in his first 5 years in the NFL, and his play culminated in being franchise tagged in 2008, and a ProBowl selection after the 2008 season. He was also selected to the All Star game in 2010, despite the Panthers finishing the season at 2-14, proving either that the NFL and voters really do know how good a player Jordan Gross is, even on a bad team, or that the Panthers were just so bad in 2010 that despite having a ProBowl tackle, they still only won 2 games. Probably both.
#94 - Brandon Carr, CB, DAL [TD = 54, PG = --, GS = --]

Our first defensive back on the list is Brandon Carr, now of the Dallas Cowboys, previously of the Kansas City Chiefs. Carr joined the Chiefs from the Div II Grand Valley State as a 5th round selection, reportedly as the only player Chiefs HC Herm Edwards wanted with the pick. He joined the league as a player with a solid skill set, who needed time to develop at the next level, but the Chiefs threw his straight in at the deep end in week 1, and he’s started every game since. He is known as a corner who can make plays on the ball, evident with 65 passes defended in his 4 years, including 40 in the last 2, as well as 8 interceptions (4 in 2011). As a free-agent in 2011, the Cowboys leapt at the opportunity to sign him to help their ailing secondary. Now, with the chance to compete against some top level receivers in the NFC East (Nicks, Cruz, Maclin, Jackson, a Redskin?), Carr will be able to accelerate his development and prove to the league whether it’s time to consider him an elite CB.
#93 - Karlos Dansby, LB, MIA [TD = 53, PG = --, GS = --] 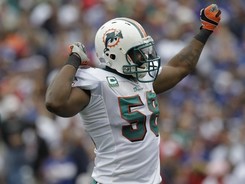 Dansby has been a consistent force in the NFL for 8 seasons, 6 with the Cardinals, who drafted him #33 overall in 2004, and 2 with the Dolphins. Over those 8 years he’s stacked up 751 tackles and 30.5 sacks, lead the Cardinals to a Superbowl appearance in 2009, and earned the (then) biggest contract for an inside linebacker in NFL history by moving to the Dolphins on a 5-year, $43millon contract. Perhaps surprisingly, Dansby has never been voted to the Pro-Bowl, but based on his prediction that the Dolphins are going to the Superbowl this year, we can expect to see him voted there for 2013 (if the Pro-Bowl still exists). I mean, let’s be honest, there aren’t any players on the Miami offence who are going to take them to the playoffs…
#92 - Sean Lee, LB, DAL [TD = --, PG = --, GS = 51]

In just 2 years Sean Lee has propelled himself to 92 in our list. Joining the Cowboys as a 2nd round pick in 2010, Lee immediately found the field, and played 14 games in his rookie year, and recorded 27 tackles and 2 interceptions, one of which he returned 41yds for a TD. By year 2, Lee had done enough to earn a starting role, and played 15 games in 2011 – finishing as the Cowboys leading tackler with 105, as well as having the most interceptions (4). It is surely only a matter of time until Lee is considered amongst the best linebackers in the league.
#91 - Darren McFadden, RB, OAK [TD = 51, PG = --, GS = --] 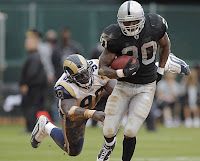 Run DMC has almost unrivalled talent, the only thing that holds him back is his fragility. In 4 years in the NFL, McFadden has never played more than 13 games in a season, and last year managed only 7 starts. When he’s on the field, however, he’s dynamite, which he proved with his 2010 numbers that would look good even if he’d played all 16 games, rather than missing 3: 1,157yds at 5.2YPC, 7TDs, plus 47 rec for 507yds and a further 3 TDs. If McFadden manages to stay fit right through 2012 there is no doubt he’ll shoot up our ranking, particularly with the departure of Michael Bush clearing the way for McFadden to get more goal line touches. Unfortunately for Run DMC, the Raiders aren't blessed with a lot of other offensive talent, so there is a good chance he'll face 8-man boxes for a considerable part of the year, and they may not get to the goal line as often as he'd hope...
Don't forget to check back in tomorrow for selections 81-90, which includes a Superbowl winning WR, a 3-time ProBowl running back, and a Cleveland Brown!

If you disagree with the choices we've made, or think we've missed some important people out, tweet us, and we might just have a TPL Mailbag to round off the series!
- Phil Gaskin (@sosayitisaid)
- The Pulling Linemen
Posted by Writers at 19:01