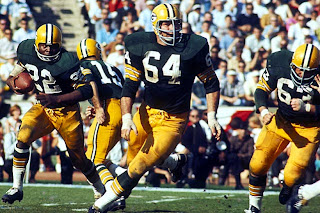 If I were to tell you that a 3x Pro Bowl, 5x All Pro player, named to the  1960s All-Decade team and the NFL 50th Anniversary Team, and winner of 5 (FIVE) NFL Championships was NOT a member of the NFL Hall of Fame in Canton, Ohio, would you believe me? Well, it’s true. And Jerry Kramer is the Original Pulling Lineman.
The Green Bay Packers have a storied history. As early as 1929, Earl “Curly” Lambeau (who the Packers’ home field is, of course, named after) had his team winning championships, and league legends such as Johnny McNally, Arnie Herber and Don Hutson were dominant for him throughout the 1930s and into the ‘40s. This dynastic team had won 6 league titles by 1944, but fell on hard times for the next 15 with the gradual retirement of their veteran stars.
The arrival of HC Vince Lombardi in 1959 is often hailed as the catalyst in the Packers meteoric return to form in the ‘60s, winning 5 Championships in 7 years. The Hall of Fame coach had a team full of Hall of Fame players, on both sides of the ball. Bart Starr was under centre; Paul Hornung and Jim Taylor were running the rock; and Ray Nitschke was terrorising opposition running backs. But an integral piece of this dominant team, without whom the offense would have struggled to be anywhere near as dynamic, has been consistently passed over for Hall of Fame induction, despite being listed as a finalist 10 times since becoming eligible. That man is Jerry Kramer, the Original Pulling Linemen, and it’s about time he found his way to Canton.
***
Although born in Montana on January 23rd, 1936, Kramer and his family moved in Idaho when we was a 4th grader, and his football career began at Sandpoint High School.
Like more recent NFL linemen Mark Schlereth, Jake Scott and Mike Iupati, Kramer attended the University of Idaho, and played guard and kicker for them for 4 years. In 1958, he played in the College All-Star Game against the then NFL Champions the Detroit Lions, beating them 35-19. His #64 jersey was retired by the Vandals.
Jerry was drafted in 1958 by the Green Bay Packers with their 4th round selection, pick #39. It wasn’t a bad draft for the Packers overall, selecting Pro-Bowl centre Dan Currie in round 1, and Hall of Famers Jim Taylor and Ray Nitschke in rounds 2 and 3 respectively. In that same draft, a lesser known offensive tackle called John Madden was selected in the 21st round by the Philadelphia Eagles, who would go on to become the Superbowl winning, Hall of Fame Coach of the Oakland Raiders. In his rookie year in 1958, Kramer played every game, but couldn’t prevent the Packers finished a league worst 1-10-1 record.
In 1959 came Lombardi, and the turnaround of the Packers fortunes. Lombardi made a number of personnel and system changes, perhaps most successfully implementing his signature “Packers Sweep”.  As part of this play, both offensive guards pull towards the play side and attempt to form a seal on the inside, and a seal on the outside, leaving a clean alley for the running back to run in along the outside. As an athletic guard, Kramer was perfect for this system.
A 7-5 finish in ’59 was followed by a trip to NFL Championship game in ’60, where a nail-biting loss to the Eagles momentarily delayed the Packers rise to greatness. Kramer played every game in both ’59 and ’60, and earned a First-Team All-Pro selection for the first time in 1960. In ’61, on the way to the Packers first NFL Championship Title since ’44, Kramer suffered a bad ankle injury, meaning he could only play in 8 of the Packers 14 regular season games, but he returned with a vengeance in ’62 and ’63, playing all 14 regular season games at guard, and also acting as place kicker. In the ’62 Championship Game versus the New York Giants, Kramer kicked 3 field goals of 26, 29 and 30 yards on the way to the Packers 16-7 victory, including one with just 1:50 left on the clock that gave the Packers a two score lead an effectively ended the game. Kramer was named All-Pro and voted to the ProBowl in both ’62 and ’63.
Injury limited Kramer to only 2 games in 1964, but for the final 4 years of his career, 1965-68, he played in every regular season game, and was a vital part of the Packers three back-to-back titles in ‘65-‘67. Undoubtedly the career defining moment of Kramer in this period was the 1967 NFL Championship game against the Dallas Cowboys, often referred to as the Ice Bowl – the coldest NFL game ever played (windchill to around -57oC/-70oC). With just seconds left in the game, the Packers found themselves down 17-14, at 3rd and goal on the Dallas 2ft line. QB Bart Starr turned to Kramer, and asked him if he could get the traction to run a wedge play. Kramer was confident he could, so Starr called it, a QB keeper wedge. Together with C Ken Bowman, Kramer executed a perfect goal line drive block, moving DT Jethro Pugh back and inside, allowing Starr to dive in for the game winning TD. This play has been simply dubbed “The Block”, and became a central point of Kramer’s first book, Instant Replay, a diary of the 1967 season, culminating with the Ice Bowl victory. The Packers’ prize for their Ice Bowl victory was a place in Superbowl II, which they won easily, 33-14 over the Oakland Raiders. Kramer was again named to the ProBowl and a First Team All-Pro in ’67. Lombardi stepped down as Head Coach after Superbowl II, and Kramer played just one more season, in 1968, which finished 6-7-1, but it will be The Block in 1967 that Kramer will be most remembered for. Following his retirement, Kramer was named to the 1960s All-Decade Team, and also the NFL 50th Anniversary Team. Kramer is THE ONLY player on that 50th Anniversary Team not currently enshrined in Canton. 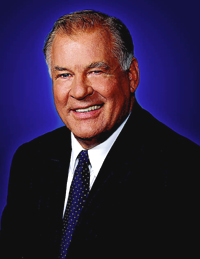 So, why exactly isn’t Kramer in the Hall of Fame? Well, that’s a very good question. Offensive guards are notoriously under-represented in Canton, and this certainly doesn’t help, but you’d expect a player of Kramer’s calibre and with his accolades he’d be a shoe in. One main argument people often give is that there are so many of the Lombardi-era Packers in the Hall, there just isn’t room for any more – how many Hall of Famers could there realistically be on one team? The problem with that argument is that it sucks. You can’t judge Kramer based on the talent of the team around him; you have to judge his ability as an athlete alone. He was an outstanding blocker, an exception athlete for a 6’3 245lb lineman, and a versatile player who could not only easily handle defenders, but also kick Championship winning field goals. The fact that Kramer has been named on the shortlist for Hall of Fame induction 10 times since he became eligible, and also named the #1 Player not in the Hall of Fame by NFL Network shows that plenty of people appreciate his greatness. We just need the Canton voters to agree.
Here’s where you can help. Jerry’s daughter Alicia has had enough of her dad being overlooked year after year. She has started a Jerry Kramer 4 Hall of Fame campaign (@JerryKramer4HoF, www.jerrykramer4hof.com) and hopes to attract the support of fans, players (current and former), and try to influence the Hall of Fame voters to finally do the right thing. From the website you can sign an iPetition, find details of how to send a nomination postcard to the Hall of Fame offices, and see a list of all the Hall of Fame voters on Twitter so you can personally contact them and ask for Kramer to be considered again.
We’ve signed the petition, we’re signature #2822. Don’t you think it’s about time you did too?

- Phil Gaskin (@sosayitisaid)
- The Pulling Linemen
Posted by Writers at 17:18