Sack It Off - Rams Done Before Thanksgiving. Again. 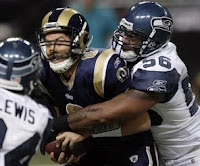 The hardest thing about summing up the Rams at the moment is where to begin. At 0-5, things looked bleak, at 2-7 there was a glimmer of hope, but after defeat to the Seahawks the season is basically over before Thanksgiving. Again. Here are just a few of my musings brought on by Sunday’s game.
The Seahawks scored 3 TDs on the Rams on Sunday. A passing TD, a wander to the right from Marshawn Lynch and a breakaway run by Justin Forsett. This makes the D sound pretty shoddy, especially considering Tarvaris Jackson hadn’t thrown a TD pass since week 5... But just look at where these scoring drives started from: Rams 40, Rams 25, Rams 21. Thanks to punt returns and turnovers, Seattle had to move the ball a total of 86 yards to score three times against a team that has scored 2 TDs in a game just once all season. The D actually played a pretty good game. They forced turnovers early, they got consistent pressure on the QB, and the rotation at DE looks better every game as Long dominates, Quinn improves, and Hall continues playing like a true pro. Unfortunately, they were given an impossible job by the offence and special teams.
As Spagnuolo eluded to in his post-game press conference, something was wrong with the game plan on the punt team, and why Donnie Jones kept putting the ball deep in the middle of the field is beyond me. On 10 punts in the game, 7 were returned, for an AVERAGE of 10 yards. 70 yards of territory eaten up without the D stepping foot on the field. One return, for 25 yards, came when the Rams punted from their own 25 and put the Seahawks on STL 40 – starting the drive which ended with the Seahawks first score. Another, for 37 yards, came when Washington took the ball on the SEA 12. Stopping him for even a 10 yard return here gives the Seahawks a long field and puts some pressure on their offence to move the ball. Instead, from the 49 yard line, they could pretty much do what they want. Fortunately, the ensuing drive was ended by two sacks (Hall and Quinn), but the punt from Seattle went like this:
(14:51) 9-J.Ryan punts 63 yards to STL 1, Center-49-C.Gresham. 18-A.Pettis to STL 9 for 8 yards (35-K.Cox). 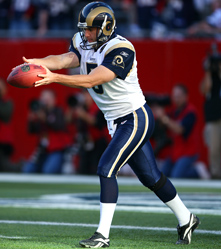 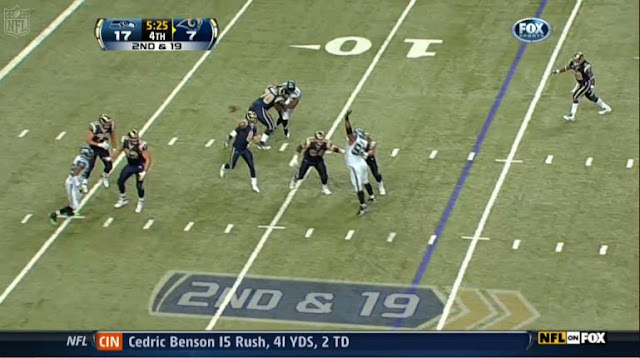 Jacob Bell continues to block Mebane throughout the play. He does glance back in case there is a delayed rush from a linebacker behind him, but stay engaged throughout, tying up Mebane’s right arm. But, because Wragge has dropped off the block, even though he’s directly in front of his quarterback and in the middle of a throwing lane, Mebane still had a free left arm and enough space and balance to jump. Bradford’s throw hit him square in the hand, and the ball starts to tumble. Wragge, here’s some blame.
After a ball is tipped so close to the release point, it’s pretty much anyone’s guess as to where it’s going to end up. Fortunately for the Rams, the deflection favours the receiver. Austin Pettis appears to have run a hitch on this play, and despite feeling a lot of pressure on his inside shoulder from DB Roy Lewis, he still has the opportunity to make the play. He’s able to get a jump and bring both hands up to meet the ball as high as he can, and it hits in perfectly on his right palm. Now I know he probably wasn’t expecting it, and the balls obviously no perfect spiral at this point, but when a ball hits an NFL receiver in his open hands, he has to make the catch 99 times out of 100. Pettis, here’s some blame.
It’s pretty hard to attribute much blame to anyone else on this play. Although Seattle had 8 in coverage, they did line up in a standard 4-3 set to begin the play, meaning there were only 4 DBs out there. With Steven Jackson able to leak off to the left, Sam had 5 receiving options available to him. From the footage I’ve seen, I don’t know exactly what routes the other WRs were running. It appears as though Bradford’s pass was intended for Mark Clayton, who had found a soft spot in the zone coverage, inside corner Richard Sherman, and underneath safety Earl Thomas (who was playing very deep) – had the ball reached its intended destination, it would have found Clayton in a yard or two of space, and with the time to make a cut up field. You can’t put any blame on Clayton then, he had made himself an available and open target 15 yards down field.
You can’t really put anything on Bradford either. He saw the rush from Brock in front of him, and stepped up nicely into the pocket behind Dahl’s block. He did still hold the ball a little long for my liking, but realistically if he wanted to find an open receiver downfield then he had to – and at 2nd and 19 the dump off to Jackson, which probably would’ve made no more than 6/7 yards, was of little use. But that’s just the point. At 2nd and 19, normal plays that could make you 3-6 yards are useless, you’re constantly fighting to get yourself out of a hole, and the defence is able to drop 8 men in coverage. Sometimes when that happens, a defensive lineman finds himself in the right place at the right time. As the ball looped out of Pettis' hands, the 323lb Bryant found the ball falling straight towards him. He caught it, managed to switch it to his left arm so he could hand off Austin Pettis, and bumbled a few yards before being brought down at the sideline. After getting himself a sack on the play before, he'd earnt his spot in the limelight. For the Rams, they have to learn: it’s what happens when you don’t deal with pressure.
-      Phil Gaskin (@sosayitisaid)
-      The Pulling Linemen
Posted by Writers at 15:26