The Pulling Linemen Predicts: Week 8 + Games of the Week

Toby Durant’s Game of the Week: New England Patriots (5-1) @ Pittsburgh Steelers (5-2)
Forget Peyton Manning’s Colts, these 2 are the AFC powerhouses. They’ve represented the conference in 7 of the last 10 super bowls, winning 5 of them. And once more they’re the early leaders in the AFC.
The Pats are coming off a gritty win against Dallas and a bye week that has allowed them to prepare for this tough road game. An advantage Brady and Belichick don’t really need when it comes to playing the Steelers.

The Patriots are 7-1 vs the Steelers when Brady’s been at the helm, with the only defeat coming in 2004.
It had been hoped that the bye week would allow defensive captain Jerod Mayo (knee) time to get over his injury, but he’s currently listed as Questionable. They have also cut cornerback Leigh Bodden this week, meaning larger roles for their leading interceptor Kyle Aarington and rookie Ras-I Dowling.
As for the Steelers, Hines Ward has been held out of practice this week with an ankle injury while James Harrison’s continued absence with a broken face (no joke) has really hurt the Steelers defense. To fill the void at outside linebacker they’ve moved Lawrence Timmons across, but this has just served to weaken the interior of their defense. You can bet that the Patriots tight ends are going to be exploiting that all night.
The key for the Steelers will be keeping up with Brady, because he’s owned their defense since he entered the league. They just can’t operate as well if you get them out of their base 3-4 by spreading the offense. And there aren’t many that are as comfortable in that situation as Brady and the mighty Wes Welker.
The Steelers hopes then lie in Big Ben and Mike Wallace. Wallace grabbed attention in this game last year with 8 catches for 136 yards and 2 touchdowns (most of that in the 4th quarter). This season Wallace is averaging over 100 yards a game and is as fast as ever. He’s been good for 1 or 2 HUGE plays a game so far, so you can expect him to really stretch a Patriots secondary that has been shaky to say the least.
They way forward for the Patriots on defense is exactly what they did last year. Blitz the heck out of Roethlisberger. They took advantage of the Steelers porous O-Line to attack the QB and made sure to get him down too. Not much has really changed since then.
Expect this to be a fast-paced shoot out. The Patriots usually abandon the run vs the Steelers and put the game on Brady. It’s not a bad tactic. 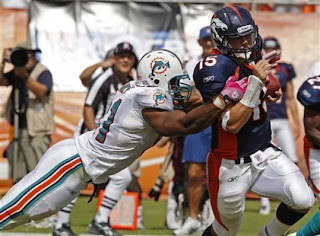 "I do not count Tim Tebow among the great quarterbacks, or even the mediocre quarterbacks. He stinks as far as I'm concerned... His throwing motion is so atrocious, and he throws such wobblers. He's so inaccurate, that anything else he does with his legs cannot make up for how awful he is" - Dave Dameshek

"The Lions are going to kill them... Everybody wants to ignore those 55 minutes of game time where Tim Tebow was absolutely awful because he had this amazing come back" - Adam Rank

"You will see, the more film NFL defensive co-ordinators get on him, the more he is going to look bad, bad, bad. They will figure out ways to completely clog him up... There is no reason to drop your safeties back if you're playing Tim Tebow. You can bring them all up to the line because he's not gonna throw it over your head. And once every team starts to commit to that and realise that's the way that you can play Tim Tebow, where's he going with the ball? He's not going to be able to run it, it's gonna be all short little passes - there is no ability to stretch the field when Tim Tebow is your quarterback, and that's gonna be the death of that offence." - Dave Dameshek