Some Things Are More Important Than Football...

Just about every non-football related story you hear about NFL players is bad. Be it criminal, drink/drug-related (PED or otherwise), or in the case of Reggie Bush, what relationship stage he is going through with Kim Kar-Krashian, or whoever, none of it shows NFL players in the kindest of lights. If, like me, you’re sick of hearing one problem after another and would prefer to know some of the good, generous and heroic things people in the NFL do with their personal time, then maybe some of the quick-hit stories below will be a pleasant relief!

Ted Larsen Saves Kayakers
Obviously, let’s start with a lineman – the most good, generous and heroic of the all positions in football. One offensive lineman, the Buccaneers’ Ted Larsen, saved three teenagers from drowning in the Gulf of Mexico when their kayak overturned. Larsen was fishing near Honeymoon Island with his girlfriend when they heard a call from the coastguard signalling a boat in distress nearby. When they arrived, Larsen was greeted by two teens in the water, clinging to their overturned kayak, with another teen in a second boat. The Bucs 2nd year guard plucked the teens from the ocean and shuttled them back to shore. Being in the right place at the right time helps, but answers the calling for help saved 3 lives.
Kansas City Chiefs are full of heroes...
Perhaps the best tight end in history, and certainly the best to play for the Chiefs, is Tony Gonzalez. In 2008, he saved a choking man in a restaurant by performing the Heimlich Manoeuvre. When Ken Hunter got a piece of meat lodged in his throat, his girlfriend’s screams for help were met by stunned silence from the rest of the diners in the Huntington Beach restaurant. Gonzalez, however, reacted straight away, and as Hunter began to turn blue, he performed the Heimlich and managed to dislodge the meat. (As a side note, tight end Jeremy Shockey of the Carolina Panthers, recently saved choking teammate Ben Hartsock at the Panthers facility after he started choking on a piece of pork tenderloin at the team’s facility.)
Leonard Pope, current tight end for the Chiefs, had to react quickly to save a life too. At a pool party during the recently deceased NFL Lockout, Pope was enjoying a quiet evening, until he heard screams coming from outside. Anne Moore, mother of 6-year old Bryson, was calling for help as her son got into difficulties in the deep end of the pool. Pope, without hesitation, ran to the pool, dived in headfirst (wallet, phone etc still in pocket) and lifted the boy to the side. Heroic for saving a life, and complete selflessness for doing so without worrying about his personal possessions.
Perhaps the most selfless story of this type is that of Joe Delaney, who played two seasons for the Chiefs in the early 1980s. The All-American running back was AFC Rookie of the Year in 1981, and set franchise records that stood for 20 years. In 1983, Delaney went with friends to an amusement park in Monroe, Louisiana, where children were swimming in a pool not intended for leisure, just aesthetics. When three children got into difficulties in the 20 foot deep pool, Delaney dove straight in to help. What makes this remarkable is that Delaney himself could not swim. One child was able to make it back to shore without harm, but the other two unfortunately passed away, as did Delaney. In the words of Ronald Regan, who posthumously awarded Delaney the Presidential Citizens Medal:
“He made the ultimate sacrifice by placing the lives of three children above regard for his own safety. By the supreme example of courage and compassion, this brilliantly gifted young man left a spiritual legacy for his fellow Americans.”
Ultimate bravery and the ultimate sacrifice.
Michael Irvin Speaks "Out" 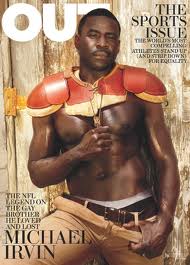 In terms of bravery, life-threatening situations often come in for the greatest praise. However, something that rarely comes in for the same kind of acclaim, and often will face ridicule instead, is the bravery to stand-up for a controversial causes that you believe in. Earlier this year, former Dallas Cowboy WR Michael Irvin, a man with a reputation for womanizing and self-confessed homophobia appeared on the cover of “Out” magazine. Why? Because he is now a passionate advocate for Gay rights. Growing up, Irvin idolized his older brother Vaughn, but at the age of 12 he discovered something that affected his life throughout his football career. Irvin saw Vaughn, dressed in women’s clothing, walking towards “all the craziness in the ’hood,” Despite their father Walter Irvin’s assertion that Michael should love his brother unconditionally, no matter what he looked like or how he chose to live his life, once Michael found fame at University of Miami and subsequently the Dallas Cowboys, he worried that his brother would bring shame on the family, and also that people might think he himself was gay. Michael attempted to keep any question of this silent, and made a point to show off all his female, let’s call them “acquaintances”, to his teammates. Irvin’s brother died in 2006 of stomach cancer, and it was this that helped contribute to his decision to begin fighting and speaking out against homophobia. In a close-knit world like the NFL, where players like DeSean Jackson and James Harrison will openly use homophobic terms like “gay-ass” and “faggot” as insults, the bravery of a man like Irvin to stand up for this causes is unquestionable, and will hopefully encourage future generations of NFL players to be able to come-out if they wish to, and help their teammates to be more accepting. As Irvin stated in the “Out” article: “When these issues come out, I want to have a voice to speak about them. I think growth comes when we share. Until we do that, we're going to be stuck in the Dark Ages about a lot of things. When a guy steps up and says, 'This is who I am,' I guarantee you I'll give him 100% support." Good man.
Dancing With The Stars...
This is perhaps my favourite story, and certainly the most heart-warming. JT Thomas, the Chicago Bears 6th round pick in the 2011 draft, lives in West Virginia after attending WVU as a student. His 7 year old brother, Jared, suffers from autism, and rides the same bus as Joslyn Levell, a 14 year old spina bifida sufferer, who attends Suncrest Middle School in Morgantown W.Va. Having grown up in Chicago, Levell is a huge Bears fan, and after finding this out the bus driver arranged a meeting between her and JT, who was more than happy to meet and sign a few items for her. Now that’s nice enough, but whilst spending time together, Joslyn revealed that she’d had a bad week, as all the boys she’d asked to go to the high school dance with her had declined. JT comforted her, and after contacting Joslyn’s parents to check it would be ok, he offered to escort her to the dance himself – an offer she readily accepted. This might seem unusual for a 22 year old man to escort a 14 year old girl to a dance, but JT has a long history of charity work with children who haven’t been given the opportunity to do the same things as he has, particularly autism, through his brother. On the night of the dance, JT arrived in a rented black Chrysler, with a bouquet of roses and a corsage. He escorted Joslyn through the crowds of on-lookers who hadn’t believed that she would be there with an NFL player, and the two of them danced a few times before the evening was out (specifically in front of the boys that had turned Joslyn down previously!) After the evening was over, Thomas and Levell went their separate ways, but they intended to stay in contact and will always have the dance they shared together to remember. At the time, Thomas said that if he made it with the Bears he’d do everything he could to make sure Joslyn could get to a Bears home game to see her beloved team for the first time. Having signed a 4 year deal in July, Thomas will get the opportunity to stand by his promise.
Of course, a large number of NFL players, coaches and staff do a huge amount of work for charity also; including setting up foundations in their names, in honour of family members, colleagues, and fans; visiting and raising money for current and ex-servicemen at home and oversees; and by taking time out of their schedules to help build playgrounds, schools and other community projects in their local areas. But the stories above highlight how people in the NFL can make vital, selfless decisions to save lives and change lives on an individual basis, and it’s something that we can hope the headlines are full of in the future instead of the DUIs, PEDs and Look-At-Mes.

- Phil Gaskin (@sosayitisaid)
- The Pulling Linemen
Posted by Writers at 11:53