The AFC West has been pretty predictable for many recent seasons, with the San Diego Chargers claiming the divisional crown and post-season football after a traditionally slow start. In 2010, however, there were some surprises. The Chargers again started slow, but this time didn't manage to catch the rampant Kansas City Chiefs - and neither of these two could beat Oakland, who went 6-0 in the division. And in Denver, well, they had Tim Tebow...
Read more »
Posted by Writers at 13:08 No comments:

Unwanted Division, Free To Good Home
The NFC West has, not unfairly, been labelled the worst division in football. None of the 4 teams made it to .500 last season, with the Seahawks finishing “the best of the worst” at 7-9. This year, the division really is there for the taking with each of the four teams in with a chance if certain pieces can just fall in to place - all it needs to someone to take it.
Read more »
Posted by Writers at 14:14 No comments:

This has been the Patriots division for a long time. Since Tom Brady became their starter in 2001, New England have won the division every year bar the 2002 and 2008 campaigns (in ’08 Brady only played 1 quarter of football too). However, recently it’s been the New York Jets who have done better in the play-offs, reaching the AFC Championship game for the past 2 years and beating the Patriots on-route in 2010.
The Buffalo Bills and Miami Dolphins meanwhile, are very much playing catch-up and tend to offer little resistance when it comes to playing the 2 big boys at the top.
So without further ado, let’s do this thing.
Read more »
Posted by Writers at 02:33 No comments:

Over the next few days, The Pulling Linemen will be telling you what to expect from every division around the league. First up is the only division in 2010 to have three teams with double-digit wins: the NFC South.

With regular season football approaching fast, this is the time of year that fantasy drafts rule people’s lives. It’s also the time that fantasy tips, pointers, sleepers and mocks are cropping up left, right and centre, all with conflicting advice and opinion. With that in mind, we here at The Pulling Linemen would like to make things worse by throwing in each of our own 2 cents!
Don’t like what we’ve got to say? Then let us know by commenting at the bottom! Think we might be on to something, don’t tell anyone until after your draft – you’ve got to do everything you can to get one step ahead of the competition (although we draw the line at 4 hours of research on kickers...).
Read more »
Posted by Writers at 16:28 No comments:

Email ThisBlogThis!Share to TwitterShare to FacebookShare to Pinterest
Labels: Fantasy

Gur Samuel: We’ve previously debated which recent retirees deserve to go into the hall of fame on the first ballot, and assuming no one wants to argue the case for Channing Crowder, who has retired since we debated that topic, we'll now turn towards current players. A few ground rules first: There’s no need for us to discuss Tom Brady or Peyton Manning here. Both have been sure-fire first ballot guys for years, and Toby will spend far too long discussing Brady.
Toby Durant: Fair.
GS: Secondly we want to try and avoid any projections of careers, i.e. players who have only been in the league for a few seasons. We’re going to look at veteran guys who already have the majority of their career behind them.
Phil Gaskin: Good idea.
Read more »
Posted by Writers at 15:15 1 comment:

Email ThisBlogThis!Share to TwitterShare to FacebookShare to Pinterest
Labels: Roundtable

The Season's Bear-ly Started, But Tice Has His 5...

56 sacks in a season is horrible. That is how many the Bears offensive line gave up last season, yet still they somehow made it all the way to the NFC Championship game and within an MCLs breadth of making it to the Superbowl. But even with so many things up in the air with the NFL due to the drastically shortened off-season period, the Bears have announced that they have chosen the five offensive linemen they will start with against the Falcons in their regular season opener on September 11th, but why, and will they be any better in 2011 than they were in 2010?
Read more »
Posted by Writers at 12:04 No comments: With the first pre-season games upon us today (HUZZAH!!!) The Pulling Linemen produce some tweet-sized predictions for the coming year:

Madden 12: Impressions of the demo.

Since the second edition of the Madden video game franchise in 1990, EA have released a new edition of the game every year. It is, perhaps, unreasonable to expect major overhauls of the game with each annual instalment; but since EA agreed to terms with the NFL on an exclusive license in 2004, stifling the threat posed by Sega’s NFL 2K series, there has been a sense amongst some gamers that EA have not really felt any need to make considerable improvements or innovations to the Madden games. This was particularly true after the release of Madden 11, which, aside from the little-used, quickly-ignored ‘Gameflow’ feature, was considered by many to essentially be a £40 roster update with some minor graphic improvements. With the NFL recently extending EA’s exclusive license, so that Madden will be the only official NFL game until at least Madden 14, many wondered if this year’s instalment would fail to live up to expectations in the way its immediate predecessor had.
After playing the Madden 12 demo, let me assure you that this is certainly not the case.
Read more »
Posted by Writers at 09:46 No comments:

Email ThisBlogThis!Share to TwitterShare to FacebookShare to Pinterest
Labels: Madden 12, The Pulling Linemen

It’s week one of the 2007 season. I’m with some friends enjoying the return of the NFL and watching my beloved New England Patriots control the game against the New York Jets. It’s the middle of the 3rd quarter when Tom Brady takes a snap and just stands around his own 43 yard line. I’m thinking: “Brady never holds the ball this long, something’s gone wrong.”, and as Brady launches a ball downfield I’m almost certain something bad was going to happen. It was a feeling I wouldn’t experience again until week 5 of the 2010 season.
As the camera tracks the ball a silver and blue blur comes across the field, racing past 3 Jet defenders who all seem to have better position to make the play than he does. But Brady’s weighted the ball just right. And this blur comfortably catches the ball before walking into the endzone. Welcome to Foxboro #81. 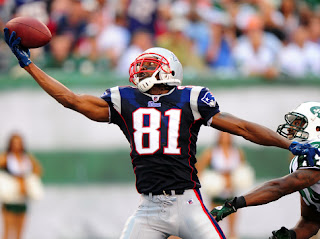 With Randy Moss's recent retirement, a lot of debate has arisen over whether or not he deserves to be elected to the Pro Football Hall of Fame on the first ballot. This got us wondering: which NFL players not yet eligible for the HOF are first balloters? In the first of two roundtables, we discuss retired players who have not yet reached their first year of eligibility. In the second roundtable, we will discuss active players. (Warning: brace yourself for some favouritism towards alumni of our respective favourite teams!). So guys, who'll be getting golden jackets on their first try?
Read more »
Posted by Writers at 14:01 1 comment: 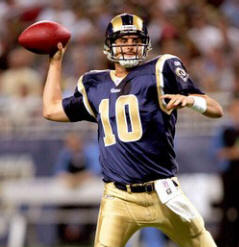 In a week where Randy Moss joined the queue for 1st ballot Hall of Famers right behind Brett Favre by announcing his retirement, the decision by Marc Bulger to hang up his cleats has passed by with relatively little fanfare. But here at TPL, we understand the plight of the forgotten man; and as a Rams fan, I remember the good times we had with Marc under centre. It’s with this in mind that I present a farewell to #10.
Read more »
Posted by Writers at 14:48 1 comment:

Roundtable - Evaluating the best, and worst, Offensive Lines in the NFL today. 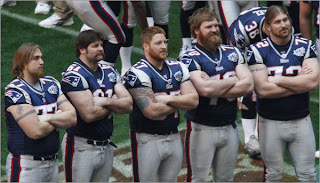 Toby Durant: Welcome to what will be the first of many roundtable discussions about the NFL. With me I have fellow co-founders of The Pulling Linemen; Phil Gaskin and Gur Samuel. Firstly I feel I should tell you where our allegiances lie before we begin. I’ve been a long standing fan of the New England Patriots and Phil is a keen fan of the St. Louis Rams. Gur, the newest to the game out of us, follows the Tampa Bay Buccaneers.
So with the formalities out of the way let’s get down to business gentlemen. And what better topic to open up with than to discuss the best offensive lines in the game today, and those that might just surprise us in the coming season. So, your nominations please...

Email ThisBlogThis!Share to TwitterShare to FacebookShare to Pinterest
Labels: Roundtable 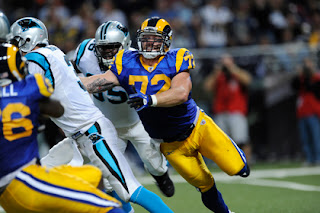 The Rams front 4 came forward in leaps and bounds during the 2010 season, under the tutelage of Ken Flajole with more than a little helping hand from Steve Spagnuolo. But entering this year’s (frankly ridiculous but awesomely exciting) free agency, there were a number of questions hanging over this unit that could be summed up in 2 words “Age” and “Talent”. But with the draftees now in camp, and free agents agreeing to terms left, right and centre, have these questions been answered, or does the front office still have more work to do?
Read more »
Posted by Writers at 14:55 No comments:

Welcome to the Pulling Linemen: a football blog dedicated to bringing you stories, opinions, roundtables and more, from the guys at the centre of football - Linemen!

The Pulling Linemen are three passionate football fans from the UK, dedicated followers of the NFL who have played as linemen at college and senior level. We are committed to bring you a unique perspective on the NFL and the game in general. Make sure you follow us on twitter (@PullingLinemen) to keep up to date with our latest articles and take on NFL news.